As the flood waters slowly recede across South Dakota, farmers and gardeners are anxious to get their seeds and plants in the ground this spring season. A month ago at this time, the Southeastern areas were recovering from rain and rapid snowmelt from the March 13-14 storms and flooding. Much of the rest of the state was still under a blanket of deep, wet snow over frozen soils.

As of May 3, the snow cover has melted in all but the Black Hills area and soils have thawed out quickly, according to the SD Mesonet. Soil moisture, however, is still quite high in many Southern and Eastern locations. The moisture from 2018 and into the fall season had left soils nearly saturated, even before the snowy and wet winter and spring of this year. Even areas that have had a couple of years of drought in the Central part of the state have recovered top soil moisture well this spring. Deeper layers are still showing some drier soils in 20-to-40-inch depths, as a residual from years of drought.

The James River through South Dakota is in Major flood stage in early May and is expected to remain in some level of flood stage for many weeks yet. The crest has likely already passed through the upper basin, as stream gauges and the forecasts are indicating steadily lowering levels above Forestburg. It is forecast that the last crest will pass through the mouth of the James River at the Missouri River in mid-May.

One thing to remember as we come out of peak snowmelt season is that flood risk is not over. With saturated soils and rivers and creeks still at high levels, a flash flood can occur very rapidly. Even a “moderate” thunderstorm of less than an inch of rain can run off soils quickly and cause flash flooding across roads, fields, or poorly drained areas and raise rivers. 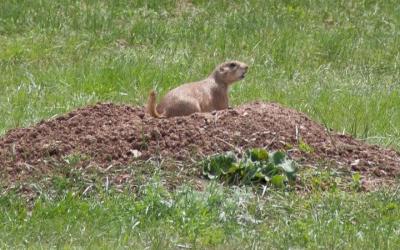