Weather conditions common to many spring and summer seasons in our region can be favorable for a certain kind of poisoning that can affect cattle on pasture. Cool, damp spring weather followed by warmer temperatures favors grasses becoming infected with ergot bodies.

Ergot bodies appear as dark-brown to black growths replacing the seed heads of grasses and grains (Figure 1). The growths vary from the size of a seed kernel to several times its size. Ergot bodies result from infection of the grain by a fungus called Claviceps purpurea. Claviceps grows well in warm weather and infects over 200 species of grasses throughout the country. Examples of plant species infected include wheat, barley, oats, brome grass and wheatgrass to name a few.

All domestic animals are susceptible to the effects of ergot; however, due to their diets, ruminants are usually more commonly affected than others. The ergot bodies contain several toxic chemicals produced by the fungus, called ergot alkaloids. The effects of these chemicals on animals can vary widely and cause problems systemically, as well as with the extremities of the animal.

In cattle, a common effect of these chemicals is a constriction of the small blood vessels to the extremities, like the ears, tail and feet. Blood flow may be compromised, and in severe cases, result in gangrene, or sloughing off of hooves and the distal parts of ears and tails. Initially, animals may appear painful and lame; this may be initially confused with other causes of lameness on pasture, such as foot rot. However on closer examination, the extremities of animals affected with ergotism are cool to the touch, and there is a line of demarcation between normal and non-healthy tissue. In recent years, area producers have reported cases of tail necrosis in cows and bulls on pasture; it’s possible, but difficult to confirm, that these cases may be associated with ergotism.

Sheep are susceptible to ergotism as well, but they tend to show milder clinical signs than cattle.

Swine fed grain contaminated with ergot can show feed refusal and decreased weight gain. Gangrene is less of a problem in swine, but occasionally edges of ears and snouts may slough.

In sows, ergot is associated with reduced milk production, infertility and early parturition, resulting in birth of smaller, weaker pigs.

Pregnant mares seem to be very sensitive to ergot alkaloids, with abortions and lactation failure being major effects.

Diagnosis of ergotism is usually made on the basis of clinical signs in the animal and the presence of large numbers of ergot bodies in grain or on grass in pasture. When it comes to the crude levels of ergot bodies in feed, it is difficult to establish a safe level due to variation in toxin levels and susceptibility in animals. Grain is rejected for marketing when it contains over 0.05% ergot bodies by weight. Levels of ergot fed at 0.02% of body weight fed for 11 days resulted in gangrenous ergotism in cattle. That equates to a bit over three ounces per day for a 1,000-pound cow. In general, 0.5% ergot in the ration has resulted in poor-doers, and rates between 0.3% and 1.0% of the ration resulted in gangrenous ergotism when fed for several weeks.

Because of the variability in toxic levels in affected plants, it may be useful to have feedstuffs analyzed for ergot alkaloids. Grain or hay baled after grasses have headed out may be candidates for analysis if desired as feeds. Total dietary levels of 100–200 ppb of ergot alkaloids can be associated with adverse effects on livestock performance, but this is dependent on many animal and environmental factors. Contact your veterinarian or Extension livestock specialist with questions about feed testing.

Treatment of ergotism in affected animals consists of removal of the animals from the offending feed source and providing supportive care to manage pain, stress and secondary infections of the affected body parts.

Recognizing ergot in pasture grasses or feedstuffs is the first step in being vigilant for potential animal problems. The only preventive measure known is removing animals from infected pastures or feedstuffs. Mowing or grazing grass before it flowers will prevent the formation of ergot bodies on grasses. 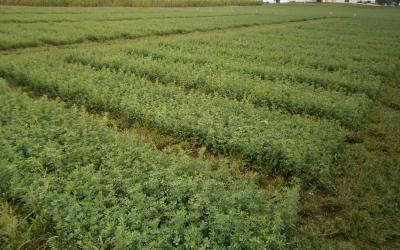 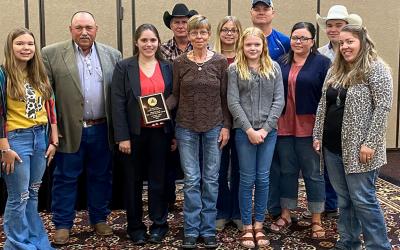