Drought stress is usually the major limitation to forage yields. When drought has compromised tonnage of corn grain, silage producers may still retain part of its feeding value. Although grazing the plants is an alternative, mechanical harvesting maximizes the tonnage obtained. Preserving drought-stressed corn plants as hay is usually not recommended because plants retain moisture and are difficult to dry. Preserving high moisture corn plants as baleage (50-60 percent moisture) can also offer difficulties as stalks can puncture the plastic wrap with air infiltration of the forage mass. Aeration will lead to heating (and even spontaneous combustion), mold growth and mycotoxin production, and reduced palatability and overall feeding value of the stored forage. Because of these considerations, if producers are going to go through the trouble and expense of harvesting corn plants it is worth doing so as silage by following traditional best management practices.

Of the water uptake by plants approximately only 1 percent is retained for metabolic processes, the rest is used to move minerals from the roots to the stem and during evaporative cooling (Buxton and Fales. 1994). During dry periods and to reduce water losses through transpiration plants respond by closing their pores (stomata). This mechanism saves water but also shuts off evaporative cooling which, when combined with environmental heat results in higher foliage temperatures which further impairs plant metabolism. A slowing down of the enzymatic processes allows the plant to save energy and nutrients to be used in the regrowth once soil moisture conditions improve. It has been suggested that photosynthesis is less affected by drought than respiration rate and growth which increases non-fibrous carbohydrates in the plant (Buxton and Fales. 1994). This natural mechanism helps the plant recover and facilitate regrowth once water availability is restored. The restriction in plant stem development (fibrous carbohydrates and lignin), the presence of proportionally more leaves and the reduction or suppression of starch deposition in the kernels results in plant material with higher fiber digestibility and crude protein content.

According to the National Corn Handbook publication "Utilizing Drought-Damaged Corn", if little or no grain is present, a rough pre-harvest estimate of yield per acre may be one ton of 30 percent dry matter corn silage per foot of plant height (excluding the tassel).

In the Midwest, problems associated with Aspergillus and aflatoxins are most common in hot dry weather. Damage to corn by drought stress increases the susceptibility of the kernels to mold infection. Aflatoxin is produced by the fungus Aspergillus flavus. The extension plant pathologist Gary Munkvold indicates that this fungus grows best in weather that is hot and sunny, warm at night, and dry during the silk and fill stage. Drought stress increases the number of Aspergillus spores in the air, therefore, when it occurs during pollination, the increased inoculum load (spores in the air) greatly increases the chances of infection (Cassel et al., 2001). Before making silage, dairy farmers should check the presence of Aspergillus flavus on the unfilled portions of the ear (yellow mold). Ensiling corn usually does not decrease aflatoxin concentrations. Aflatoxin B1 is extremely toxic and the most potent natural carcinogen, it can also be excreted in milk in the form of its metabolite, aflatoxin M1. The FDA limits aflatoxin in complete feeds dairy cows to no more than 20 parts per billion (ppb) and to 0.5 ppb in milk.

Harvesting drought-damaged and (or) immature corn as silage is not greatly different from making silage from more mature corn. These include avoiding delays in filing the silo, packing well, and using a protective cover to minimize air infiltration and nutrient losses. Proper moisture is very important for adequate fermentation. The nutritive value of silage from immature corn will depend on the stage of maturity. If the corn has little or no grain, the nutritive value will be reduced somewhat; however, silage from corn that has had some ear and kernel development can have similar energy content as that produced under normal conditions. Coors et al. (1997) evaluated the forage quality of corn with 0, 50 and 100% pollination of the kernels on an ear in Wisconsin in 1992 and 1993. As ear fill increased from 0 to 100%, whole plant CP decreased by 1%, NDF decreased by 8%, ADF decreased by 4%, and IVTD increased by 3% (Table 1). Although these years were not considered drought stress years, it results can give us an idea as to quality changes occurring due to poor pollination. Feeding trials over the last two decades have shown that corn silage made from plants that are in good condition, but poorly pollinated, will contain 85-90% of the energy per pound of dry matter that’s contained in normal corn silage (Black et al., 1997).

According to the University of Minnesota, corn in the blister stage can be as high as 80% moisture, significantly higher than what is recommended for proper ensiling. To ensure proper fermentation in horizontal silos, the moisture content should be between 63 and 68% whereas for upright silos, moisture should be between 60 and 65%. Silage that is too wet will likely have excessive seepage and an off odor. The effluent (fluid that seeps out of the silo) contains a high amount of nutrients, which reduces the nutritive value of the forage and could potentially cause environmental concerns. The effluent also contains organic acids that are necessary for proper ensiling and preservation of the crop. Finally, the fermentation that occurs at higher moisture concentrations can result in the production of butyric acid, which gives the silage a sour smell that can reduce palatability, potential feed intake, and milk production. Due to these issues, it is recommended for harvest to be delayed to achieve 70% moisture. On the other hand, if plants are too dry (moisture content below 60%), water can de added to bring moisture content to a more desirable level. Harvesting silage that is too dry can create problems.

Dry silage can be difficult to pack properly, and it can lead to heating and mold development. Heating in the silo can result in a reduction of feed value. It can also pose safety concerns. When opening a heated silo for example, there is potential for spontaneous combustion that could result in personal injury or property damage. Silos that contain silage of questionable moisture content should be monitored closely and care should be taken when opening the silo for feeding.

Pricing drought stressed corn silage in the field can be somewhat challenging. With "normal" corn silage producers oftentimes use the current price per bushel of corn grain times 8 - 9 to assess the price per ton of stored corn silage (i.e. if corn price is $4 /bu then corn silage is valued at $32 - 36/ton as fed). This might work well if the nutritive (energy/protein) value of the drought-stressed silage is similar to corn silage harvested under normal conditions.

Dr. Bill Weiss et al. (2002) indicate that drought-stressed standing corn is worth at 73 – 90% of the economic value of normal corn silage (at the same dry matter content). But, due to many factors that can influence the quality of drought-stressed corn silage, a laboratory analysis of the whole plant is needed when pricing this forage. Table 2 shows the nutrient composition of 8 samples of fresh corn silage collected in South Dakota during the drought of 2012. Energy contents varied between 0.61 and 0.72 Mcal./lb, and increased as starch content improved. 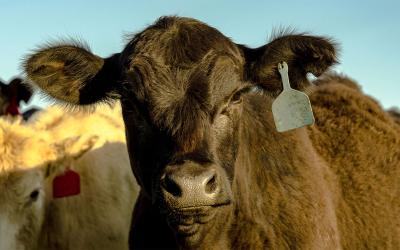 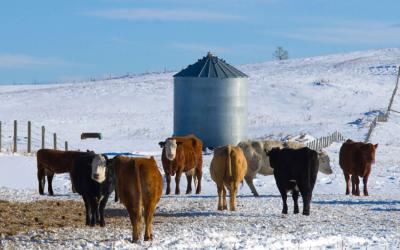 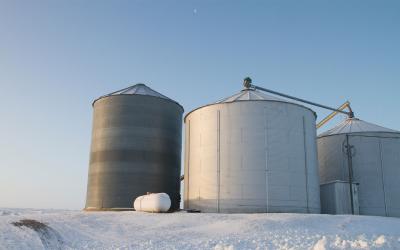