Cover crops are generally defined as crops planted between cash crops to cover and protect the soil. Some demonstrated benefits of cover crops include: reduced soil erosion, increased soil organic matter, increased biological diversity, increased nitrogen supply, and weed control. Depending on the farmers’ objectives, different species of cover crops can be planted. For example, if a farmer’s main objective is to increase nitrogen supply, then legume cover crops best suited to the farm area should be selected. If increasing soil organic matter is the main objective, then the best choice is to include high biomass-producing cover crops.

In the US Corn Belt, Cover crops adoption rate was only 18% a decade ago (Singer, et al., 2007). The adoption rate of cover crops has been increasing rapidly in recent years, with more and more producers starting to recognize the benefits of utilizing them. In 2016, the 4th annual survey carried out by the Sustainable Agriculture Research and Education (SARE)/Conservation Technology Information Center (CTIC) from 48 states in the U.S. revealed 81% of the 2020 survey respondents were cover crop users. Among the users, 67% had an experience of less than 5 years, indicating the majority of users were relatively new in cover crop practice. Survey findings also revealed farmers’ motivations and challenges when it comes to cover crops adoption.

Based on the 2016 survey by SARE/CTIC, the top three benefits of cover crops perceived by farmers were all soil related, as follows: 1) increased soil health; 2) increased soil organic matter and 3) reduced soil erosion. Farmers’ motivations to plant cover crops are directly related to their perceived benefits.

Accordingly, the majority of the respondents listed soil related benefits as their motivation for cover crops adoption, which were: increased overall soil health (87%), increased soil organic matter (83%), reduced soil compaction (76%), and reduced soil erosion (76%). Similar findings were reached by Singer (2007), which showed reduced soil erosion and added soil organic matter as the most important reasons for cover crops adoption. Besides soil benefits, the secondary source of motivation is the nitrogen source provided by cover crops.

Economic factors, such as increased profit from yield, haying and grazing, are not viewed as important source of benefits or motivation. In the 2016 SARE/CTIC survey 47% of farmers listed increased yield of cash crops as a motivation to cover crop adoption, but only 25% listed increased economic return or decreased production cost as their primary motivations.

Based on this survey, the top three major challenges perceived by producers were: 1) cover crop establishment; 2) time and labor required to manage cover crops and 3) seeding the right species for my operation.

Before farmers make conservation practices adoption decisions, economic profitability is usually an important factor to consider (Cary and Wilkinson, 1997). When it came to cover crops adoption, however, neither “extra economic costs” nor “no measureable economic returns” were viewed by many as a factor that hinder their adoption decisions. Only 16% of farmers perceived “no measurable economic return” as a major challenge, and 40% perceived it as no challenge at all, the remaining 44% perceived economic return as a minor challenge (SARE/CTIC, 2016). A separate survey finding also showed that economic costs were not considered as a barrier to cover crops implementation (O’Connell et al., 2014). When asking about the actual change in their profits after implementing cover crops, only 5.7% reported a decrease in profits, whereas 33% reported improved profits. The rest either reported no-change or lack of sufficient data to evaluate change in economic profits due to the short period of implementation (SARE/CTIC, 2016).

Cash crop prices are generally not perceived as a factor that affects cover crop adoption. On a 1 to 5 scale, with “1” denoting strongly agree and “5” strongly disagree, the average response to “Commodity prices do not impact my use of cover crops” was 2.23, very close to the “agree” response. This indicated cover crops adoption will not be discouraged by the current low commodity prices.

Most of the farmers showed either strong agreement (35%) or agreement (28%) with the statement that if cover crops lower their crop insurance premiums, then they will increase cover crops acreage on their farm; only 7% showed disagreement. This shows insurance policies on cash crops, if contingent on cover crops adoption, could have a significantly positive effect on their adoption. 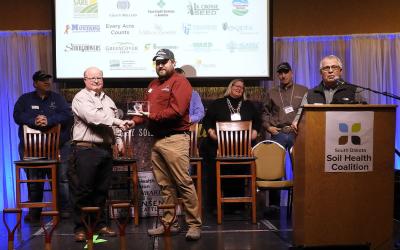