Watering Options For Your Garden

The weather this year has been a vast improvement over last year’s drought for most gardeners with the rains that most of us have had. Granted, sometimes it was too much at once, but I think that is better than almost no rain at all. But, even in a year with normal rainfall, most people will have to water their gardens at least once in a while to get them through the dry periods and therefore have better production.

There are lots of ways to water the plants in your garden. Some of the most popular utilize oscillating sprinklers that apply water over a pattern that you can select on the sprinkler, impact sprinklers that spray water over a selected radius or full circle and spot sprinklers that spray water over a small area. All of these can work well but also have a few disadvantages. First of all they all spray water over head, up into the air. Whenever you spray water in the air you have the potential to lose a significant amount of it to evaporation from the time when it leaves the sprinkler until it lands on the ground or your plants. Secondly, you often fight against one of the common aspects of living on the Great Plains – wind. The wind may blow the water away from where you want it to go. If you add these two factors together along with some hot summer temperatures and you might end up with a watering system that is not very efficient at getting the water to where it needs to go, your plant’s roots. In addition, everything gets watered, the beans in your garden row and also the weeds in between the rows. That means more weeds and weeding.

Another disadvantage of these systems is that you usually will have to move them around to get coverage over your entire garden. This can be a challenge, especially if you are trying to water a large patch of squash or melons that have covered up the garden space, not knock over plants as you drag the hose around or get the water up high enough to effectively water a patch of sweet corn that will block most sprinklers unless you put them on a post or a ladder. Plus, it is usually pretty muddy after watering so you might lose your shoes in the process. Finally there is the issue of plant diseases, particularly foliar and fruit diseases like the various blights on tomatoes. In most of these diseases, both caused by bacteria and fungi, splashing water is a common means for the disease to spread. Also many diseases need wet foliage over several hours to get established on a leaf. If you can keep your plant’s foliage dry you will generally have fewer disease problems.

This brings me to suggest another means of watering your garden – using a drip system. Drip systems offer several advantages over overhead watering. They allow you to get water precisely where it is needed, at the base of plants where roots can take advantage of it. That means you have a very efficient watering system. Little water is lost to evaporation because you are not sending it up in the air. The plant’s foliage stays dry to reduce disease development and spread. You reduce the amount of water in between the rows of vegetables so you will usually have fewer weeds to pull. And, since most drip systems are installed semi-permanently for the growing season, you don’t have to drag a hose through your garden as much as you would with a sprinkler system.

Of course there are some disadvantages too. Drip systems can be rather expensive and labor intensive to buy and install, at least at the beginning of the season, but once you have them in place you don’t have to move them again, at least until the end of the season. But some of those costs will be offset by the savings you will see on your water bill from using less water to keep your garden growing than by using overhead irrigation. It can also be difficult to find drip irrigation supplies in some areas but they can usually be purchased online or from a catalog. Also, if you have a drip system installed, you will need to be careful when tilling or digging that you do not damage the line.

There are a number of different types of drip systems available. The most commonly available type of drip irrigation uses an ooze hose. This is a porous hose, often made from recycled tires, that allows water to ooze out of little pores all over the length of the hose, where it then soaks into the soil. These are great, inexpensive alternatives to using a sprinkler where you might have a small garden or bed to water or where you may not want to get water sprayed on other things, like your deck, windows or driveway. Check out the package for information on how many hoses you can hook together. If you try to attach too many, you may run out of water before the plants at the end of the line can get any. Ooze hoses are also nice in that they are usually quite flexible so you can run the hose along garden rows and around plants very easily. You should probably also purchase some landscape staples that you can use to hold down the ooze hose where you want it so it doesn’t move around too much. If you have a large garden, you will have to break it down into different zones then connect your garden hose to each zone, allow it to get watered, then move the garden hose to the next set of ooze hoses to water that area.

If you have a larger garden or planting beds around your home or yard, you might want to invest in drip tubing. This tubing often comes with little drip emitters built right into the hose. They are usually spaced out at various intervals, like every 6”, 12”, 18” or 24”. Each emitter will also have a rating of the volume of water that it will emit over the course of an hour, like 0.6 or 0.9 GPH (gallons per hour). If you have a heavy soil that does not absorb water very quickly you will probably need to look for a lower GPH and also a wider emitter spacing, like every 18” to spread the water out and allow the water to soak in without running off. Lower GPH ratings allow you to cover a larger area from a single feeder source, like a garden hose, but you will have to water for a longer period of time to thoroughly water the whole area.

There are also little drip emitters that you can install into blank drip line. These work particularly well for planting beds with ornamental plants or for watering a squash or melon planting where you planted the seed in hills. Just lay out the lines where you want them to go, and then insert the drippers where your plants are. These also come in rated application rates so you can apply more or less water as needed by different plants.

The inline drip irrigation tubing can usually be purchased in rolls of 50, 250 or 500’. Just get the length you need for your garden or planting bed. You can also purchase drip irrigation kits that will include the tubing of your choice as well as the various fittings you will need to lay out your drip line for a garden or planting bed. One other item you should probably invest in is a filter, particularly if you are using water from your own well. Particulates and minerals can build up in your drip line and emitters, as well as in ooze hoses, that will eventually clog them up and make them useless. So use good clean water when using any of these drip systems. Another accessory that you might want to consider is a water timer. These will generally turn the water on and off at a set time so you don’t have to worry about forgetting to water or to turn it off when it is done. There are many available on the market to choose from.

One last comment regarding the cost of a drip system is that they can generally be reused for several years or growing seasons. For garden installations, let the excess water drain out, then pull it out of the garden at the end of the year. I coil mine up and store it in my shed for the winter. Then the next year I can till the whole garden at the end of the year, get my garden planted and lay out the drip lines again. If it is in a flower or landscape bed, disconnect the drip line from your hose or hose bibb and let the remaining water drain out. You can also hook up an air compressor to blow the excess out and reduce the chance of lines bursting during the winter.

Even though fall is here, insects are still active, especially those that spend time indoors. We’ve received pictures and samples from across the state of small, reddish-brown beetles that appear inside homes. These insects are the foreign grain beetle. 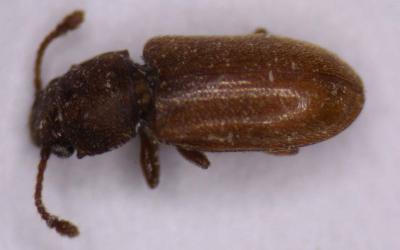 As their name implies, foreign grain beetles are a grain pest. However, they actually feed on mold and fungi associated with stored grain, and the foreign grain beetle samples we receive most frequently come from newly constructed homes rather than grain bins. 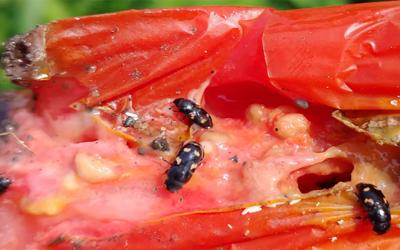 It is not unusual to see insects in a garden during the fall, but it can be frustrating to watch nearly ripe produce be destroyed by insects before it can be picked.