Grain storage is a key component in getting your crop to market. If you are holding over grain from last fall, be sure it is stored properly, and kept cool and dry. Aside from watching bins for spoilage, moisture, and temperature changes, make sure you are looking for signs of pest infestation. Seed borne diseases and insects can easily infest summer-stored grains and cause many problems. Maintaining a cool (<50°F during the summer months) and dry (corn: 13-14%, soybean: 11%, wheat: 13.5%) bin is key to avoiding these issues but knowing the warning signs and checking regularly is a good practice.

Storage fungi refers to fungal pathogens that contaminate the grain surface in the field during harvest and grain transportation or develop on the grain during storage when conditions are conducive, leading to grain spoilage. Storage fungi development on the seed leads to seed rotting, reduced quality and nutritional value, and some fungi produce mycotoxins that are poisonous to humans and livestock. Grain affected by storage fungi maybe discolored and sometimes may have a musty odor. Grain with extensive fungal growth may have varied discoloration including white, pink, black, blue-green/olive colors.

Several fungi can cause grain spoilage in storage, but the most common ones include Penicillium spp, Aspergillus spp, Alternaria spp, Fusarium spp, Rhizopus stolonifera, Mucor spp, and others. These pathogens are abundant in the environment but development on the seed maybe enhanced by contaminated equipment or bins, mechanically damaged seed, and insect feeding. The most important risk factors for storage fungi to develop are grain moisture content, temperature in the grain bin, and length of grain storage. Naturally, the longer the grain is stored, the more prone it becomes to fungal infection while in storage, however, this process is dictated by the storage conditions.

There are several species of insects that feed on stored grain. Both the immature (larval) and adult stages of stored grain beetles are capable of causing damage to grain, while only the larval stage of the stored grain moths cause damage. These insect pests can be grouped based on whether they are internal feeders or external feeders. Internal feeders feed within the kernels while external feeders will consume grain dusts, cracked kernels, and other grain debris. Below are the common internal and external stored grain pests. In addition to these, other species including the foreign grain beetle and hairy fungus beetle may be observed in a bin. These beetles are feeding on the molds or fungi growing on the grain.

Of the internal feeders, weevils (Figure 1, Figure 2, and Figure 3) are generally given the most attention because they are among the most destructive pests of stored grain. The larvae of grain weevils develop within the kernels, and when infested grain is left undisturbed for long periods of time can cause nearly complete destruction. Adult weevils are easily distinguished from other beetles by their elongated snouts. 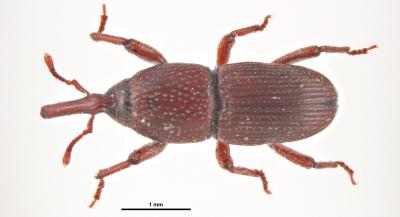 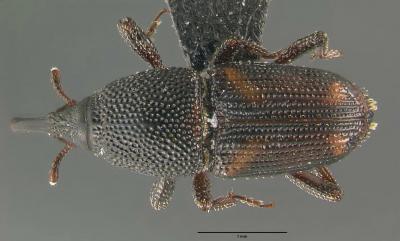 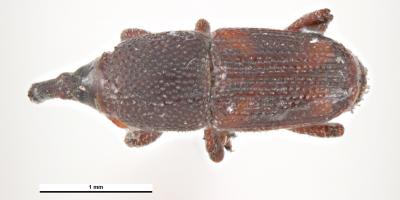 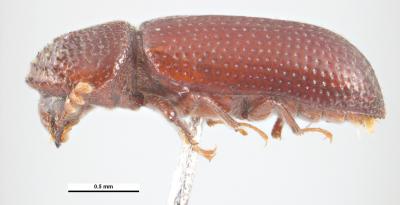 The larvae of the angoumois grain moth (Figure 5, adult moth) are typically not a pest of shelled grain. However, the larvae are a pest of ear corn and can infest the corn before it is harvested. The larvae feed inside kernels and cause an unpleasant smell. During warm falls, several generations of the moth can be completed resulting in significant damage. 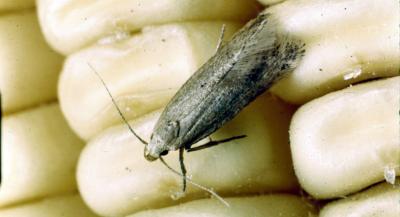 The stored grain pests that are external feeders are present in the grain because grain dusts, cracked kernels, or other grain debris are present and are a viable food source. Similar to internal feeders, the best management for these insects is prevention. The presence of fungus feeders indicates that the grain is moldy. Proper aeration and grain cleaning can prevent most infestations caused by external feeders. 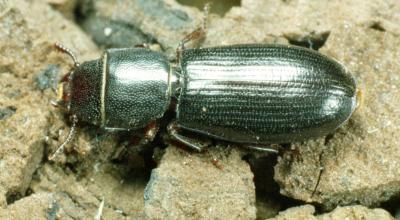 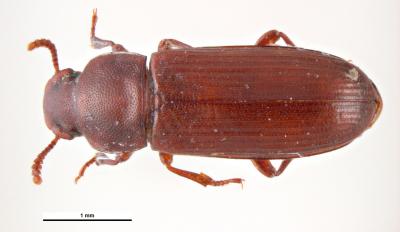 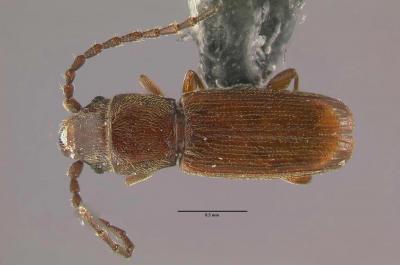 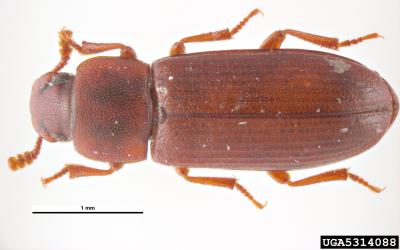 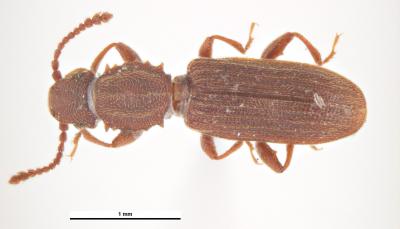 The larvae of the Indian meal moth (Figure 11, adult moth) cause direct damage to the grain by feeding on the seed germ. The larvae of this pest also reduce the quality of grain by producing waste and constructing silken webs in the grain. These webs are often observed on the top surface of the grain and can become quite thick. 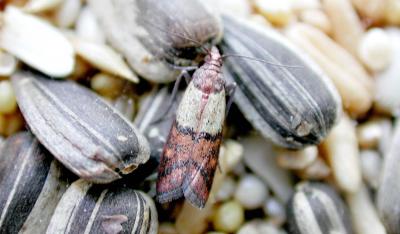 What to do if You Find Infestation of Fungi or Insects?

With stored grain pests, prevention is always the best measure. Should you find a fungal infestation in your grain bin, the best mode of action is to attempt to separate non-infected grain from infected grain. This allows you to discard infected grain and clean bins thoroughly to prevent future infestation.

If an insect infestation is detected in stored grain the grain can either be moved and have a protectant insecticide applied, fed to livestock as-is, be sold at a reduced market value, or be fumigated. Due to the hazardous nature of fumigant insecticides we strongly recommend that the application of these is done by a hired professional. Many of these products are activated by moisture, including the moisture present in air. That means the second the seal is removed, or the package is opened, the product is active. The application of fumigants should be done with a forced air or oxygen provided respirator system to prevent any negative health impacts including death. Always read and follow the label directions when using any pesticide product. 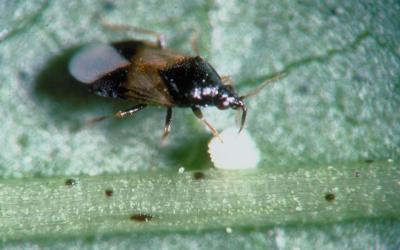