Blister beetles are becoming more common as we progress through the growing season. Recently, there have been multiple reports of blister beetles showing up in alfalfa fields. The larvae of these beetles are beneficial because they feed on grasshopper eggs. However, the adults feed on the leaves and blossoms of plants, including alfalfa, and contain a toxic chemical called cantharidin. They can be an issue when large populations are present in alfalfa fields at the time of harvest. Hay that is heavily infested with blister beetles can be toxic, making it a health concern for livestock.

Blister beetles have one generation per year. Adults can be up to 1 inch long, have a soft, elongate body, and vary in color and size based on species. The most common species in South Dakota are the black, ashgray, immaculate, striped, and margined blister beetles (Figure 1 and Figure 2). A unique characteristic of blister beetles is that their thorax (middle body segment) is narrower than both the head and abdomen. Another characteristic is that when at rest, the abdomen of blister beetles stick out past their hardened forewings.

Blister beetles get their name because their blood contains cantharidin, which causes blisters if it comes in contact with skin. The beetles release this toxic chemical through reactive bleeding to defend themselves from predators. Cantharidin is also released if the beetles are crushed, which is a problem when feeding infested hay to livestock. If an animal ingests enough blister beetles, it can lead to sickness or even death.

Insecticide applications are not recommended, as this kills the beetles but does not remove them from the hay. Dead blister beetles still remain toxic, and spraying may end up increasing the number of beetles per bale. The alternative is to cut alfalfa prior to peak bloom as blister beetles are attracted to the blossoms. It is also important to allow the cut alfalfa to dry fully before raking so that the beetles have time to vacate the plants prior to baling. The worst infestations are often located on the edges of the field, so destroying the bales produced from this hay can reduce livestock health concerns.

When selling hay, ensure that blister beetles aren’t present or notify the buyer of any infested bales. Horses have a particularly high sensitivity to cantharidin, so it is important that they don’t consume infested hay. Especially avoid feeding hay from field edges to horses. 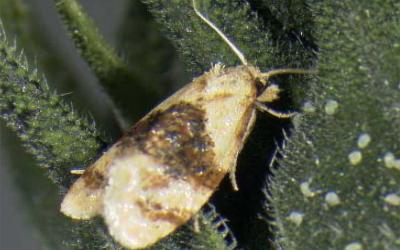 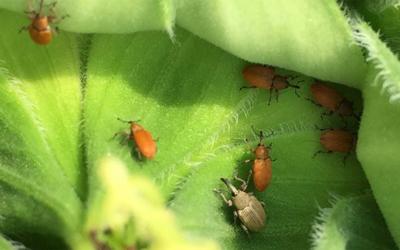 When scouting sunflower, the most observed weevil is the red sunflower seed weevil. However, there are two species of seed weevils that can be present on sunflower heads in South Dakota. 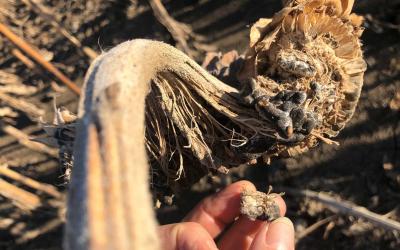 Sclerotinia diseases are a concern in sunflowers, because the fungus can infect the plant through the root, mid-stalk or the head. Wet weather and cool temperatures two-to-three weeks prior to and during flowering favor disease development.