Interest in cover crops has increased in recent times. The discussion has occurred even more in the 2018 growing season due to widespread row crop prevent acres in South Dakota. Following small grain harvest or on prevent acres, a wide range of cover crops species can be grown because there is ample amount of time is left in the season before hard freeze sets in. However, for growers who practice strict corn-soybean rotation, the selection option is severely limited. Because of extremely low temperatures, cover crop species do not establish, or in some cases even survive after row crop harvest. A winter annual, such as cereal/winter rye, has been a go-to cover crop among row crop growers because of its high tolerance to low temperatures and successful overwintering in South Dakota’s climate. Benefits of adding winter rye into corn-soybean rotation are: to improve soil quality and help protect soil erosion, suppress winter annual weeds, and diversify the farm revenue (hay, grain). Order of winter rye within the cropping sequence is very important to maintain the agronomic performance of both cash crops. Planting rye after corn and ahead of soybean is a better fit because soybeans can tolerate later plating in the spring better than corn, thus allowing rye to put more biomass in the spring. Also, soybeans generally do not show negative impact on yield due to preceding rye cover crop.

In a study initiated at SDSU in the 2011-12 growing season, winter rye was planted between corn and soybean crops to evaluate the rye biomass obtained as possible forage crop. First seeding of rye was in the fall of 2011. The 2012 season was unusually dry and soybean yields were reduced by up to 75% in plots following rye cover crop compared with check plots (no rye). In the fall of 2012, rye was seeded into different relative maturity corn using two methods, hand broadcast when corn was at mid to late maturity and drilled immediately after corn harvest. Earlier maturing corn yielded significantly less than the recommended maturity hybrid for the region. The two rye planting methods did not show much difference in crop establishment and total biomass in the following spring (2013). The average winter rye biomass (15% moisture) at the SDSU Southeast Research Farm near Beresford was 3581 lbs dry matter per acre. The rye was cut and baled on the same day before planting soybeans. The differences among rye biomass grown after different relative maturity corn were minimal, which suggests that putting rye cover crop after regular maturity corn would maximize profit for both corn and rye forage/biomass crop. This study showed that rye cover crop preceding soybeans did not affect the yield of the latter.

Similar results were obtained in the years that followed. Rye cover crop not only adds diversity to the corn-soybean rotation but is also a longer-term investment in soil quality. 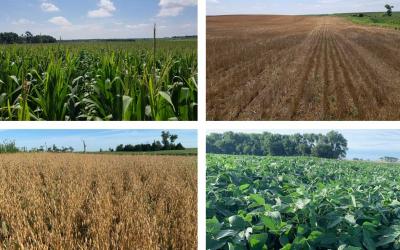 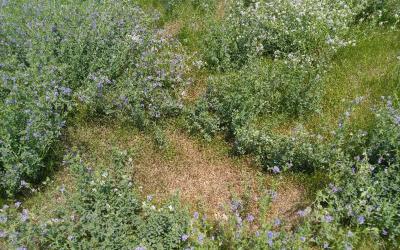 Start Scouting for Grasshopper Activity in Crops and Grasslands