Yellow sweet clover (Melilotus officinalis) has gained attention this summer, because of the tremendous yellow bloom across South Dakota. Yellow sweet clover is a biennial plant, which means it has a two-year life cycle. In the first year, there is very little top growth because the plant puts most of its resources into establishing its vast and deep root system. Most people likely do not notice it in the pasture or field because it is only a few inches tall. In the second year, sweet clover puts its resources into abovegound growth, setting up tall stalks with abundant yellow flowers. Thus, two consecutive years of good precipitation are what allow sweet clover to 1) establish and have ideal conditions for root growth and 2) flourish aboveground. Sweet clover can be differentiated from alfalfa because its trifoliate (three leaflets) leaves have teeth along the entire margin, or edge. Alfalfa, in contrast, has teeth on only half of the leaflet edge. Sweet clover is an abundant seed producer and seeds can remain viable for 30-40 years, giving it a competitive edge.

Besides producing a large amount of forage under these growing conditions, sweet clover also provides very nutritious forage if managed properly. It is a legume, so similar to alfalfa and other clovers, it is high in protein. Unless sweet clover is allowed to get tall with heavy stems, it is easily digested by livestock and is a good source of energy. It also provides good food for mule deer, elk, and antelope and good nesting habitat for pheasants, grouse, and other upland birds. Sweet clover is extremely attractive to pollinators such as honey bees, and in fact, its scientific name, Melilotus, comes partly from the Latin word Mel, which means “honey.”

There are a few problems associated with yellow sweet clover that producers should keep in mind. First, sweet clover is a legume so when it is used as a grazing resource there is a potential for bloat. Management to prevent bloat should focus on feeding livestock before turning them out to graze so that they are not hungry and thus are less likely to rapidly eat a large amount of sweet clover (or any other legume with bloat potential). Ruminants can adapt to forage with high bloat potential over a period of several days – one strategy is to pull them off the pasture for part of each day for several days or feed hay on the pasture to limit sweet clover intake until a tolerance is developed. Additionally, poloxalene (Bloatguard™) and ionophores (Rumensin™) also help prevent bloat. Be sure to start feeding these substances several days before turning the cattle out so they can adapt before consuming sweet clover or other legumes.

The major concern with sweet clover is sweet clover poisoning, which is an issue when hay is inadequately allowed to dry before being put up or becomes moldy. Sweet clover contains a substance called coumarin, which is converted to dicoumarol by fungus in moldy hay (the coumarin is what gives sweet clover its “sweet” smell). Dicoumarol is an anti-clotting agent that causes cattle to hemorrhage (bleed) severely. The conversion of coumarin to dicoumarol can occur even if there is only a little mold in the hay, so mold level is not a good indicator of the dicoumarol level. The best prevention of sweet clover poisoning is to be sure the hay is cured well before baling. This is hard to achieve with productive stands of sweet clover, because of its heavy, strong stems that are difficult to dry adequately. A management option is to cut sweet clover at a relatively immature state before thick stems form. Bailing it into large, dense bales can worsen the problem because mold formation in damp hay will be at the worst at the core of a large bale. In cattle, there may be no apparent signs of any poisoning issues because the bleeding is internal. One visual sign to look for is black, tarry manure caused by internal bleeding into the intestinal tract.

Grazing sweet clover is not problematic because the conversion of coumarin to dicoumarol is not possible without the mold fungus that occurs in wet hay. It can also be prevented by making silage rather than hay as long as the ensiling fermentation process is rapid and complete so that the silage is stable and does not allow mold growth. A management option in a wet year wherein drying hay might be difficult would be to plastic-wrap large round bales to make bale silage. Describing the details of that process is enough material for another column that will have to wait for another day, but it’s a great option for conserving forage when hay making is difficult.

There are reports of sweet clover poisoning causing reproductive problems in cows. This appears to also be related to the dicoumarol level. The dicoumarol can pass into the fetus and cause fetal death and abortion. Thus, this is more of a problem in later gestation during the winter when pregnant cows are consuming sweet clover hay. The USDA Poisonous Plants Research Laboratory in Utah has indicated that they are not aware of any information that suggests that cattle on pastures containing sweet clover during the breeding season will encounter problems with fertility or conception.

Sweet clover is an opportunistic plant that is going to be abundant in pastures and hay fields when growing conditions are favorable, ideally for two consecutive years. Although it can cause problems, it is valuable to wildlife and pollinators and is a nutritious forage source. Management strategies such as those described above will allow producers to capitalize on it in “sweet clover years.” 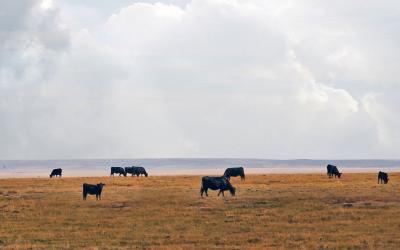 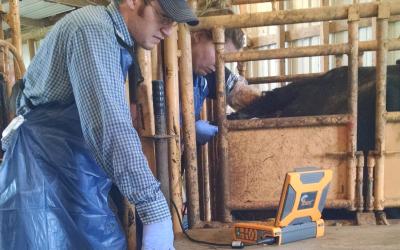 There is much value in preg-checking spring-calving cow herds in the fall. The most common is to cull open cows from the herd. The second reason would be to reduce the number of late calving cows in the herd.