In South Dakota, there are around 25 species of tiger beetle (1). Tiger beetles belong to the family Carabidae (subfamily Cicindelinae) within the order Coleoptera (beetles). They are commonly found in open, sandy landscapes, and are known for their incredible ground speed and maneuverability while in flight. They are also important bioindicators, because they are very sensitive to environmental changes. The presence of tiger beetles is a great sign that an ecosystem is healthy and should not be disturbed.

Adult tiger beetles vary in color depending on the species. Most are green, blue, purple, or brown, with metallic hues and distinct patterns or markings. They range in size from approximately 2/5 to 4/5 of an inch in length and have long, slender legs that allow them to run quickly (Figure 1). Tiger beetle adults have dramatic, round eyes and large sickle-shaped mandibles, both of which aid in catching prey (Figure 2).

In South Dakota, most tiger beetle species have just one generation per year. Females create vertical burrows in sandy substrate and lay one egg per burrow before covering it up to deter predators (Figure 3). Once the eggs hatch, larvae move upwards in their burrows, but remain inside for safety. Larvae will develop through three growth stages (instars), which can span multiple years depending on the species and/or food availability. Tiger beetle larvae can be categorized by their distinct “hooks” on the fifth abdominal segment that allows them to remain securely in place within their burrow (Figure 4). They also have a large, shovel-like head with big sickle-shaped mandibles. Once larvae are mature, they retreat into the burrow, seal off the entrance and pupate. After a few weeks, the adult emerges in early summer and remains active throughout the summer months. Adults are capable of reproducing almost immediately to begin the lifecycle over again.

Tiger beetle adults are considered generalist predators, meaning they prey on a wide variety of insects and other arthropods (Figure 5). Some of these include caterpillars, grasshoppers, ants, beetles and spiders. They are voracious eaters and capable of capturing prey due to many beneficial characteristics. The coloration of different adult species allows them to blend into their surroundings without being detected by other insects. Once an insect passes by, they ambush their prey, secure them with their large mandibles and consume them. Adults prefer to hunt open areas (i.e. sandy margins along water) during the day, where they can run at high speeds to capture prey. Tiger beetle adults are also strong fliers and can quickly move away from one area to another.

The time it takes for tiger beetle larvae to develop mostly depends on how often they can obtain food. Similar to adults, the larvae are also generalist predators and feed on a variety of arthropods. They use the hooks on their fifth abdominal segment to secure and support their bodies in the burrow while they hold their large head near the entrance (Figure 6). Once prey wanders near the burrow entrance, the larva thrusts its body upwards, uses its large mandibles to capture it and pulls it down into the burrow, where it is consumed.

Observing environmentally sensitive insect species, such as tiger beetles in the landscape is a great sign that an ecosystem is healthy and supporting a diversity of both prey and predators. Some steps to take to provide proper habitat and encourage tiger beetle presence include:

Tiger beetles provide a beneficial service and, therefore, do not need to be managed. However, they are capable of producing a painful bite if mishandled (does not require treatment). 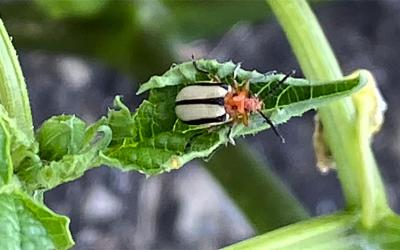 With tomatillos starting to take off, three-lined potato beetles are showing up in gardens again. Learn some key considerations for identifying and managing them before they cause serious issues in your garden. 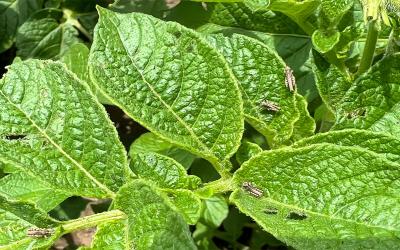 Large populations of grasshopper nymphs have been a common observation this year. One concern regarding these populations is that, as the season progresses and they continue to grow, they will need additional resources.