Fly control in dairies is a challenge, due to abundant moisture and organic matter available for fly breeding grounds. Flies not only are a pest, but they also decrease production efficiency. Flies cause livestock to expend extra energy fending them off instead of resting, feeding and milking. Other issues directly associated with fly pest problems on dairies include increased medication costs, veterinary costs, increased potential for disease spreading, and possible increased public complaints. For example, it is estimated that Stable flies (biting, blood-feeding fly) can lower milk production by 15 to 30 percent (Westbroek, 2002). Flies also can hinder worker productivity along with spreading disease to humans.

Identifying the type of fly or flies that you are dealing with on the dairy along with understanding their lifecycle is key to developing an effective fly management plan. Common flies found on dairies include house flies, stable flies, and blow flies. These flies are commonly classified as “filth flies” as they like to breed in spoiled/spilled feed, bedding, decaying organic matter and manure. They also prefer moist conditions and decaying organic matter to lay their eggs for reproduction. Of the flies listed above, only the stable fly is considered a biting fly and requires a “blood meal”. Common pests often found in pastures are typically, horn flies, face flies, horse flies, deer flies and mosquitoes. All of the pests for pastures listed except face flies are a biting insect that require a “blood meal”. To learn more about these pest populations in livestock you may want to visit these publications and webpages:

Control of filth flies is best achieved with sanitation and a combination of knockdown and residual sprays (Campbell, 2005). It is important to read the label of knockdown or residual sprays as many are not cleared for use on lactating dairy cows or in the milking parlor. The best time to apply insecticides for fly control of house and stable flies is during the hottest part of the day. At that time the insects retreat to cooler areas such as vegetation around pens, under bunks or shaded areas. Knockdown sprays are most effective when the air temperature is between 65 °F and 90 °F. Residual sprays should only be applied to shaded fly resting areas because ultraviolet light breaks them down when exposed to the sun. Rain may wash some residual sprays off or decrease their effectiveness so they may need to be reapplied. Some excellent references for fly control management and products available are provided via the following webpages and publications:

Areas to concentrate cleaning efforts in fly control management include: cattle pens, calf housing and loafing barns, drainage areas, manure storage areas, free-stalls, in and around waterers, feeding aprons, feed mixing areas, or any other place where there is decaying organic matter. These areas should be cleaned and have organic matter moved away and spread on fields if possible every 10 days to break the fly’s reproductive cycle. Manure stored in silo-type storage units may crust on the top, but cracks allow flies to deposit eggs in wet material below the crust. Agitating and/or adding water may be necessary as fly larvae drown in water (Campbell, 2005). Periodic rains will help drown fly larvae in large lagoons.

Keeping flies out of the milking parlor can prove to be challenging. Keeping screens repaired and sanitation in check, along with proper ventilation which will allow the milking area to dry between milking’s will help minimize potential fly populations (Williams, 2010). It is important to read the label of any pesticide product before use to make sure it is labelled for use in the milking area and for proper application methods.

If you graze your cattle and do not keep them in dry lots or free-stall barns they may be attacked by other fly species: horn flies, face flies and horse flies are most common. Horn flies are blood sucking insects that can bite an animal up to 20-40 times per day to feed. This deters grazing and feeding resulting in decreased intake and milk production. Horse flies are typically not as prevalent in pastures unless the pasture is close to a woodland or wet marshy area. The female horse flies will deliver a violent bite with its mouth parts, often causing the animal to bleed after the bite allowing them to feed on the blood from the wound, which can also attract the female face fly. Horse flies will lay their eggs on vegetation near marshes and can have a life cycle from 70 days to 2 years, depending on species (Williams, 2010). The face fly primarily feed on animal secretions around the eyes and nose and are the common means of spreading the pinkeye bacteria, Moraxella bovis. It is important also to note that both the horn fly and face fly lay their eggs in manure so manure management in pastures by dragging will decrease fly breeding grounds. Fly control for cattle going to pasture is best achieved if the animals are forced to pass under low-hanging dust bags or oilers so their face and back get treated. Once again, it is important to check the label of the products used to make sure they are approved for their use in both lactating and non-lactating dairy animals.

One area of fly control that is often overlooked on dairies is fly control in calf hutches which may produce enough house and stable flies to be considered an economic problem. These flies act as vectors for viruses and bacteria/agents for diarrhea between calves, not to mention the dangers of maggots during disbudding and around the umbilical cord. Weekly cleaning or moving of hutches to cleaner “sun-dried” areas during the warm summer months will help reduce the breeding ground for these flies.

Fly control on dairies is an important pest management consideration that impacts the bottom line by affecting overall animal productivity and health. Even though it is time consuming, sanitation is key in providing effective fly control around the dairy and in pastures. 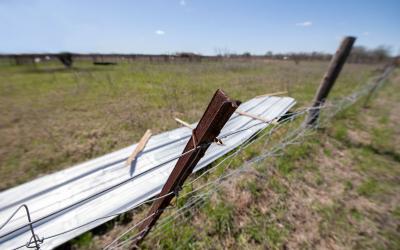 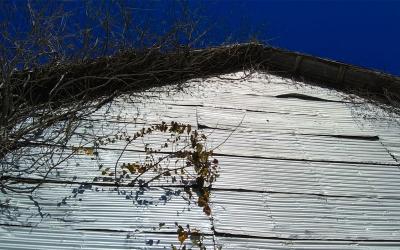 Windstorms can cause significant damage to agricultural structures, including post-frame buildings, also known as pole barns. Learn some expert tips for protecting, inspecting and repairing these structures in the aftermath of a storm. 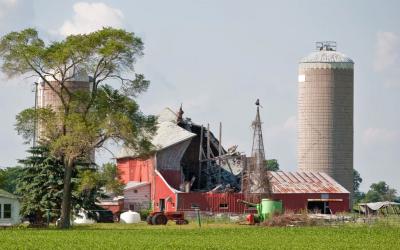