The leaves have fallen off the trees and the frost has hit the garden. Before the snow falls, a few tasks can help make for a healthier yard and garden next year. If you have a mulching lawnmower, instead of raking up your leaves, you may be able to run over them with the mower, returning all that organic matter directly to your lawn. If the layer of leaves is too thick, it may be possible to spread them out and then mulch them with the mower. You can also use a mulching mower to shred a pile of leaves, and then spread the remains over perennial beds and vegetable garden area; you could do the same and mulch around your trees. Earthworms will eventually help mix this organic matter into the soil, where it will supply nutrients, hold water and air, and condition the soil for good root growth.

Although it is better for the soil microorganisms to have plant remains present for food and shelter during the fall, winter, and early spring, there are some plants that should be removed at the end of the growing season rather than left until spring.

It is a good practice, for example, to remove any plants that were infected with powdery mildew (common annual plant hosts are zinnias, squash and pumpkins, but many other plants can be infected in a bad year). Perennial plants such as beebalm or phlox (Figure 1) that are heavily infected should be cut back after the first hard freeze, and the stems and leaves removed from the garden. (You can then spread on shredded tree leaves to protect their crowns and roots from the winter drouth and cold). Most leaf spot and blight diseases will also overwinter on infected plants, so those should also be removed from the garden in the fall. Common examples of these are Septoria, and Early and Late Blights on tomatoes, or anthracnose on cucumbers. Examples on perennial plants may include leaf spots on rhubarb, or on Iris. Careful cleanup of these leaves either in the fall or late winter (it may be easier to remove the leaves of these plants after winter dieback) can greatly reduce the amount of spores surviving to infect the plants in the spring.

If you had Echinacea, Rudbeckia (Figure 2), Asters, Marigold, Petunia, or other flowering plants that were unusually short, tended to have chlorotic (yellow) leaves, and may have had unusual flowers (leaves in the middle, or green flowers when they should have been pink), the Aster Yellows phytoplasma disease is probably the culprit. Plants infected with this disease should be removed as soon as they are noticed, because there is no treatment or cure for the disease, and insects will pass the disease on to a very wide range of other plants. If you failed to remove these plants during the growing season, be sure to remove them now, including any stray roots that might send up new plants.

Woody plants can also benefit from careful attention to sanitation. Any grape clusters that were missed or were not harvested because of disease or hail damage should be removed from the plant, as these are a major source of disease inoculum in the spring. Although major grape pruning should be left until early- or preferably mid-spring, dead or heavily diseased canes can be removed in the fall.

Apple scab (Figure 3) is a very common disease that overwinters mostly in the dead leaves on the ground, so leaves from scab-infected apple trees should be raked and removed from the area. If this is not possible, running over the leaves with a mulching mower will help expose more of the disease structures to damage during the winter, reducing their effectiveness. Spraying the trees just before leaf-fall, or the fallen leaves, with a nitrogen fertilizer solution has also been shown to be effective in reducing overwinter scab organisms. To do this, use 1.5 ounces (about 1/4 cup) of urea (46-0-0) dissolved in about 1 quart of hot water per 100 square feet.

Unless you have a compost pile that you can verify reaches the desired temperature throughout the pile (with regular turning), it is best to either burn the infected plant material that you remove from your yard and garden, or send it to a municipal composting program.

If in doubt, remove any annual plants from the garden that you suspect were infected with insects or disease, and replace with a good mulch of leaves or straw, or compost. If you are unsure about a perennial plant, cut it back, removing the stems and leaves from the garden. Watch the plant closely in the spring, and if it starts becoming infected, consult with a local Master Gardener about the best response to the suspected problem. 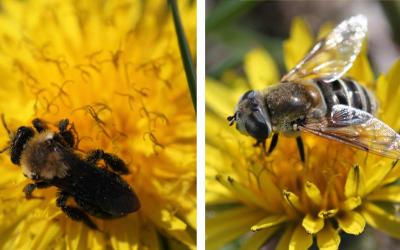 Why Those Dandelions in Your Yard Aren’t So Bad

While research has shown that pollinators, specifically honey bees, can’t survive on dandelion pollen alone, this doesn’t mean that the dandelions aren’t still important for pollinators. 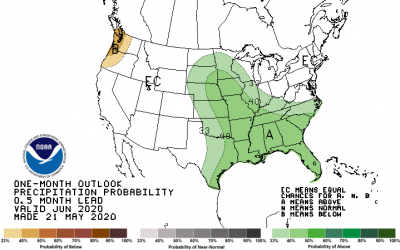 With alternating cool and warm weather patterns throughout the last few months and the summer season ahead, temperature continues to be a challenge for climate forecasters in South Dakota. 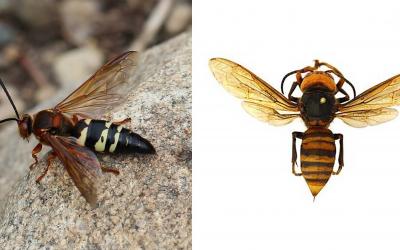 No, It’s Not a Murder Hornet.

By now, you’ve probably read headlines about the Asian giant hornets (aka “murder hornets”) that were spotted in Washington state and across the border in Canada. It is important to note that Asian giant hornets have only been confirmed in a small area of Washington and Canada. These wasps have not been observed in South Dakota or our neighboring states.