Does Crown Rust in Oats Cause Problems for Livestock?

Crown rust is the most important fungal infection of oats. This fungus can overwinter in certain plants and crop residue. Cool wet springs provide the right conditions for crown rust to build up on the alternate plant hosts, making it readily available to affect oat plants as they grow. In years such as 2019, when oats are planted late, or as alternate crops on fields where corn or soybeans couldn’t get planted, the timing was right for heavy rust infestations. Interestingly, crown rust doesn’t affect grasses or crops besides oats.

Affected oat plants will show small orange-yellow spots on the leaves, which can coalesce to the point where most of the leaf appears yellow or orange. Oat fields affected by rust can suffer drastic declines in yield.

Some fungal infections of grains and forages can certainly affect livestock, but crown rust of oats does not appear to be one of them. When fungi (molds) affect livestock feedstuffs, there are two different considerations: toxins produced by the mold (mycotoxins) and the mold spores themselves.

No known mycotoxins are associated with crown rust in oats. This means that if there are any biochemical byproducts produced by the rust organisms, they do not significantly affect livestock – including pregnant or growing animals.

The mold spores themselves may have sporadic effects on individual animals. Anyone who’s harvested “rusty” oats is aware of the dustiness in infected crops when windrowed, baled or combined. The suspension of mold spores in hay or forage (particularly horses) could result in instances of “heaves” –inflammation and constriction of the small airways, creating breathing problems in sensitive individual animals. These issues are not specific to crown rust in oats and could occur with dry hay infected by any number of mold species. If rust-affected oat hay is to be fed to horses, moistening the forage should be considered when its fed indoors.

Although crown rust does not directly affect animal health, its presence could affect feed quality or palatability. Livestock producers would be well-advised to consult a nutritionist or veterinarian if feeding oat forage affected by crown rust. 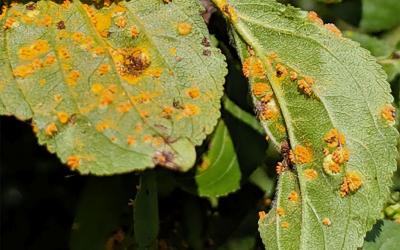 Crown rust is the most important fungal disease of oats in South Dakota. In years with heavy disease pressure, susceptible cultivars can have over 80% yield loss due to crown rust. The presence of crown rust inoculum on buckthorns can be an indication of the likely risk for crown rust to develop during the growing season. Buckthorns scouted recently were loaded with crown rust inoculum. 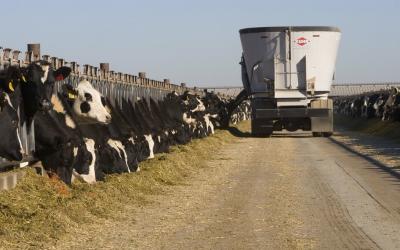 Whether your crops have been hit with drought or hail the odds are that we are going to see an increase potential for feed contaminants such nitrates or molds which cause mycotoxins. 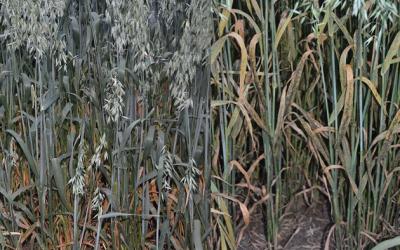 Utilize a Fungicide For Crown Rust Prevention in Oats

If you are growing oats this year for grain, be sure to scout and plan a fungicide application to protect the oats from crown rust.