Typically, we don’t see a lot of issues with blister beetle feeding in gardens. However, when they show up, blister beetles can rapidly defoliate plants. We have received reports of blister beetles feeding on pepper plants, radishes and green beans. In addition to garden produce, blister beetles will also feed on weeds within a garden, and they are often attracted to flowering plants.

Blister beetles contain a chemical called cantharidin that is capable of producing painful blisters on human skin. Cantharidin is present in blister beetle hemolymph (blood) but can be exuded through reflexive bleeding when pressure is applied to the beetle. If you even brush a blister beetle against your skin while tending your garden, you may develop blisters.

In gardens, it may be possible to remove blister beetle infestations by hand. However, gloves should be worn as blister beetles contain cantharidin and picking them up may cause the chemical to be released. Ideally, one should use disposable gloves and be cautious not touch the gloves to unprotected skin. For severe infestations, insecticidal garden powder or spray may be used to reduce defoliation caused by blister beetles. 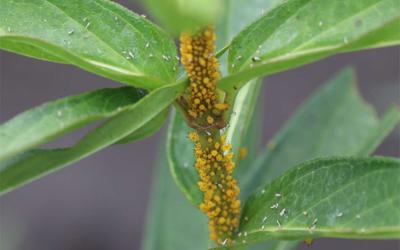 Are Aphids on Milkweed Really a Bad Thing?

This year, we’ve noticed large populations of aphids on swamp milkweed plants and we’ve identified them as the oleander aphid (Aphis nerii), which is sometimes referred to as the milkweed aphid. 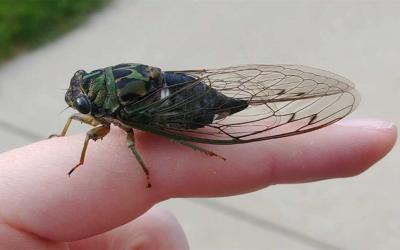 Each summer we hear a droning buzz that comes from the trees. Many residents of South Dakota attribute this noise to locusts. But that isn’t what is making the buzzing sound! The insects responsible for the buzz are actually called cicadas 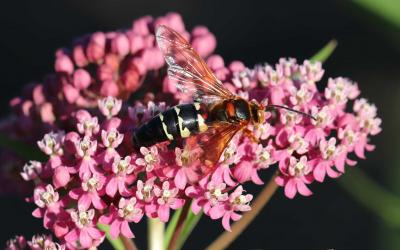 Giant Wasps Are Invading My Yard! No, They Still Aren’t Murder Hornets.

Every year we receive multiple reports of giant wasps that seem to invade yards and gardens. These wasps aren’t the same as the so-called "murder hornets," but are actually cicada killer wasps.