A few corn and soybean fields have received or will be receiving a fungicide application this season, even though the disease pressure is extremely low to justify treatment. This is partly because of good grain prices and some plant health benefits from strobilurin (QoI, FRAC code 11) fungicides. Unfortunately, resistance to QoI fungicides has been detected in several fungal pathogens. QoI resistance was detected in the frogeye pathogen of soybean, Cercospora sojina, in South Dakota in 2019. Prophylactic fungicide sprays, when not needed, may lead to fungicide resistance developing, hence rendering these fungicides ineffective in the near future.

What is fungicide resistance?

Fungicide resistance can be defined as when a fungal population is no longer sensitive to or has reduced sensitivity to the fungicide and is unable to control the same pathogen.

How does fungicide resistance develop?

Do all pathogens have the same potential/likelihood to develop resistance?

Fungicide resistance may develop due to two main factors: the pathogen factors and the fungicide factors.

Pathogen Factors: Fungicide resistance may develop in pathogens which have one of these factors:

These factors allow for high levels of genetic diversity and a greater chance of mutation within the pathogen population, which could result into reduced sensitivity of the pathogen to a fungicide.

Fungicide Factors: Examples of factors associated with fungicide which may increase the chances of the pathogen developing resistance include:

Fungicides which have one mode of action tend to have a higher risk for resistance to develop. Fungicides with multiple modes of action tend to have a very low risk for fungicide resistance, because when one site of action is avoided, the other sites will still be effective. Frequency of application can also increase the probability for resistance to develop, because with each application, only certain members of the population are removed from the equilibrium. Similarly, applying a low dose or applying too late will also increase selection pressure.

The Fungicide Resistance Action Committee (FRAC), a group of scientists representing different chemical companies, was formed to provide fungicide resistance management guidelines for the sustainable use of fungicides. This group provides the likely risk of a given fungicide to become less effective based on the mode of action of the fungicide. Mode of action group, or FRAC code, is always indicated on the first page of the fungicide label (Figure 2). Mode of action refers to the biochemical process through which the fungicide interferes with the normal functioning of a fungal cell. Fungicides that only affect a single site (single mode of action) tend to have a higher risk of resistance to develop, while those with multiple sites tend to have a low risk.

Given that just three classes of fungicides or mixtures: FRAC code 11 (QoI, strobilurin), FRAC code 7 (SDHI) and FRAC code 3 (DMI, including triazoles) are the most frequently used fungicides, it is possible a fungicide-resistant pathogen population may exist, but perhaps it is detected in low numbers or it may cause total fungicide failure at this time. The continued use of the same modes of action over time may lead to further fungicide resistance development in the state.

How do you avoid or delay fungicide resistance development? 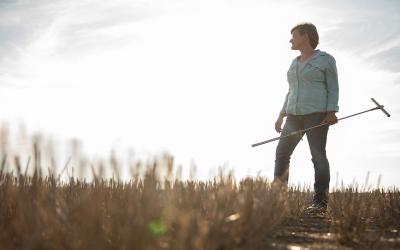