Should I Spray for Soybean Aphids? What’s the Threshold?

Using the equations from the 2007 manuscript, economic injury levels can be calculated using current values for soybean and insecticide applications. Economic injury level and economic thresholds were calculated using values from Table 1 for insecticide cost and an application rate of $5.25/A. What we observe in Table 2 is that although updated EIL’s and ET’s for soybean aphids are lower than 674 and 250 they either fall well below the boundary level of 485 soybean aphids, or very close to the original values. There are several other reasons why very low thresholds are unrealistic for soybean aphids. The most important of these is the presence of natural enemies in the field. Very small populations of soybean aphids may be naturally removed from soybean by several insect species that feed on them. Aside from the fact that applying insecticides at much lower thresholds would not result in increased revenue, there are also many other issues associated with applying insecticides when they aren’t needed or in a prophylactic manor.

The Downsides of Prophylactic Insecticide Applications

Prophylactic insecticide applications have many detrimental impacts to production and can actually result in insect pest resurgences. This occurs because a pest population may be present in a field, but it is constrained by natural enemies that are also present. Applying insecticides when no economic injury is occurring removes the few pests that were present, and also the natural enemy populations. Pests, especially soybean aphids, are capable of rapid recolonization and repopulation of a field, which results in the need for additional insecticide applications, because natural enemies are no longer present. The use of insecticides in a prophylactic manner also increases the selection pressure towards the active ingredients that are being used. Over time the continued use of an insecticide can result in populations of the pest overcoming and being resistant to the product or insecticide class. For soybean aphids, populations that are resistant to the pyrethroid class of insecticides have already been detected in Minnesota. In addition, prophylactic applications represent unnecessary input costs.

As mentioned, speed scouting for soybean aphids is an alternative to using the traditional method with the 250 soybean aphid threshold. Speed scouting is a binomial sequential sampling program that is actually based off of the 250 threshold. It was designed to provide a method of scouting that would save time, but still provide accurate management decisions. The speed scouting method uses a decision population of 40 aphids per plant, and is accessible either through a worksheet or a phone app called Aphid Speed Scout. In short, to use the speed scouting method you first assess the soybean aphid populations on 11 random plants while walking in a “W” or “Z” pattern in the field. For each plant, if it has less than 40 soybean aphids you put a “-” on the line and if it has more than 40 you put a “+”. After 11 plants are examined you tally up the “+”s. If there are 6 or less you have reached a do no treat decision for the field. If there are 11, you have reached a treat decision. However, it is necessary to reevaluate the field 3-4 days later to confirm that the population is still present before an insecticide application is applied. If 7-10 “+”s were observed additional plants must be scouted. This method reduces the number of aphids that must be counted on a plant and provides accurate management decisions.

© South Dakota Board of Regents 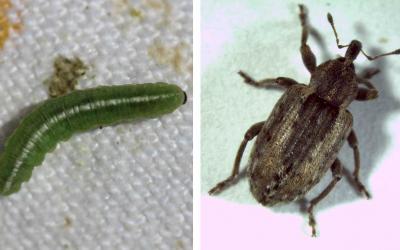