Scout for Charcoal Rot in Early Senescing Parts of the Field

The drought conditions in the past few weeks have led to some soybean fields senescing early (Figure 1). However, some of the early senescing may be due charcoal rot (Figure 2). Moisture stress increases the risk for charcoal rot to develop.

Charcoal rot is caused by a fungal pathogen Microphemina phaseoli. This pathogen survives in soil and in plant residue and infects the plant through roots. The pathogen clogs roots leading to blockage of water and mineral salts being transported.

Charcoal rot symptoms are exacerbated by the soybean cyst nematode presence in the field.

To differentiate charcoal rot from other diseases that my cause early leaf drop, such as sudden death syndrome, uproot a symptomatic plant in the middle of the patch and peel off the tap root skin, small black speckles will be seen (Figure 3-A).

Crop rotation can help to reduce the inoculum, however, charcoal rot pathogen has many hosts. 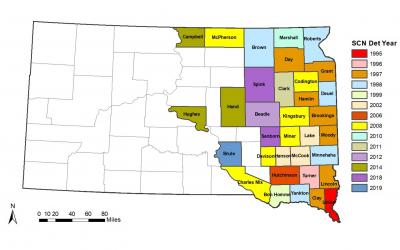 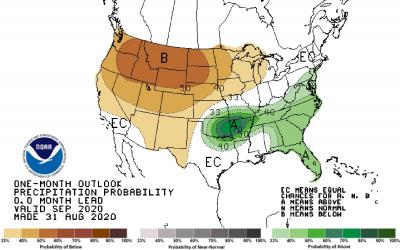 Summer has its last hurrah the first week of September before we see potential for our state’s first freeze of the fall season, according to NOAA’s Climate Prediction Center.