Currently, continuous grazing is the dominant practice in the U.S. Great Plains. When livestock graze large pastures, they tend to repeatedly graze preferred plants. As a result, the actual stocking rates in those preferred areas are much higher than the other under-utilized or totally avoided areas. Over time, such uneven distribution of grazing pressure results in declines of favorable grass species and increases in the abundance of undesirable grasses and weeds.

Compared to continuous grazing, rotational grazing involves moving livestock through several smaller pastures, with one pasture being grazed at a time, therefore provides time for defoliated grasses to recover and increases efficiency in grassland utilization. When the grazing area is divided into multiple pasture per herd, the grazing period will be shorter while recovery period for each pasture will be longer, thereby potentially allowing for greater stocking capacity and increased profitability.

To help compare optimal stocking rate and economic profitability for continuous vs. multi-paddock (MP) grazing management strategies (the latter is an intensive form of rotational grazing), Wang et al. (2018) developed a dynamic model that involves the following three interacting components: 1) an ecological component that describe the plant responses under livestock grazing; 2) a livestock grazing component that models livestock grass consumption as a function of livestock body mass, forage availability and stocking rates; and 3) an economic component that assesses the economic implications of using MP grazing relative to continuous grazing management.

Starting from a steer purchase weight of 475 pounds, our simulation findings indicated that there is an increase in ending weights per steer under MP grazing when compared with continuous grazing, especially under high stocking rates (Figure 1). If we allow the rainfall amount to increase, ending weights under both grazing scenarios will increase and the advantage of MP grazing will diminish. This implies that the benefits of MP grazing are more obvious for drought years. It is also worth to note that even though MP grazing allows for a much higher stocking rate, overgrazing is not an issue because grazing on one pasture only lasts for very short periods followed by adequate time for recovery before re-grazing. As a result, animal production per acre has significantly increased.

When will rotational grazing pay off?

Rotational grazing increases annual profit by sustaining more livestock on the same unit of grassland. However, due to the high initial startup cost, many producers may think it takes a long time to recoup their investment. Initial investment cost of rotational grazing hinges on the size of grazing unit. While it can cost $70 per acre for small ranches of less than 100 acres, it only costs less than $10 per acre on ranches with more than 400 acres (Probert, 2013). In Table 1, we listed several possible investment costs for rotational grazing, categorized as low, medium and high cost scenarios.

Figure 2 displays the 5-year net present values (NPV) for different stocking rates under four potential scenarios. Note that the star on each line indicates the optimal stocking rate where NPV is maximized. We can see that for the low and medium cost scenario, MP grazing strategy still maintains a profitability advantage over continuous grazing even in the short term. However, the optimal economic returns under MP grazing for the high cost scenario, despite the higher stocking capacity, is unable to surpass that under continuous grazing. This indicates that for relatively small ranches, MP grazing strategy probably will not pay off in five-year period.

It will take some time for the advantage of MP grazing to manifest if the initial startup cost is relatively high. Over time, however, MP grazing is generating more net income. When it comes to long-term profitability comparison, MP grazing has a more remarkable advantage (Figure 3) since the start-up cost could be spread into more years. Both large commercial ranches and small ranches will find MP practice profitable in the long term. For ranch operators that leases the land, the incentive to adopt MP grazing could be reduced if the long-term continual utilization of the ranch land is uncertain. It is important that both the lessees and the landowners are aware of the long-term benefits of improved grazing management. It also would be helpful to structure lease contracts in a way that both parties bear some investment costs resultant from rotational grazing.

This article is based upon research work that is ﬁnancially supported by the National Institute of Food and Agriculture, U.S. Department of Agriculture, under award number 2017-67024-26279. 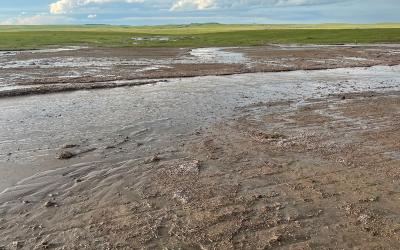 Residual forage is the amount of green leaf left after a grazing event. Understanding its importance can help producers capitalize on the symbiotic relationship that occurs when soil health is front and center on rangelands. 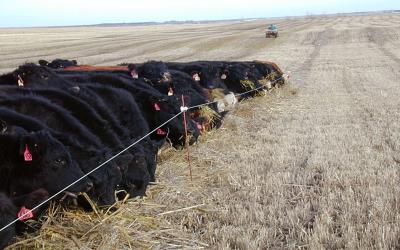