There’s nothing like green grass to remind many of us how much we love the livestock business. Amid market highs and lows, droughts, blizzards and floods, it is encouraging to remember how reliable the progression of seasons is. Every year at green-up, grass managers must make decisions about when and where to begin grazing.

Considerations include hay reserves, the cost of purchasing additional feed and the impact of early grazing on pasture grasses. How long should you continue to feed, delaying the impact of grazing on pastures? How early can you turn out, relieving the cost of feeding? Which pasture do you graze first? The answer to these questions is: It depends! You may have several options, depending on your pasture resources, your stored feed resources and your ability to be flexible in your grazing options. You may want to utilize one or more of the following options.

If you have the feed reserves available, feeding livestock a little later into spring gives your grasses time to shift from depending on carbohydrate reserves to utilizing photosynthesis for energy.

If grazing is initiated too early, production for the balance of the growing season can be reduced.

Grazing pastures planted with introduced cool-season grasses, such as crested wheatgrass and smooth brome, provides early season flexibility and avoids early grazing on native pastures which may compromise production later in the season. Tame grass pastures are typically ready to be grazed two or more weeks before native pastures are ready. Methods that are specific to smooth brome pastures are discussed in the article, Smooth Bromegrass Grazing Management.

SDSU research has demonstrated that native winter pastures could be grazed in mid-May at about 25% relative use without a decrease in stockpiled winter forage (Salverson and Gates 2020). However, exceeding 25% use or extending grazing into mid-June could reduce forage in those pastures, which you will need next winter.

Research suggests that grass plants are most-vulnerable to grazing before they have formed three new leaves. A general rule-of-thumb is that introduced pastures that contain Kentucky bluegrass, smooth brome or crested wheatgrass reach grazing readiness at the three-leaf stage. In contrast, pastures with native grasses, such as western wheatgrass and green needlegrass, should not be grazed until they reach the three-and-a-half-leaf or even four-leaf stage. This is because the introduced cool-season grasses in South Dakota are better able to withstand grazing pressure compared to their native counterparts.

Grazing readiness is specifically related to growing degree days (GDD) and knowing how many GDD are required to reach the three-leaf stage provides managers with a general timeframe of plant development, as air temperature is the main environmental factor that influences the rate of plant development. Growing degree days is the temperature or heat units that a plant needs to accumulate to begin leaf development. The date that grasses reach the three-leaf stage varies considerably, so it is recommended to examine the important plants in your own pasture. One way to come up with a date to begin examining your grasses is to use GDD, using a base temperature of 32 degrees Fahrenheit after April 1 for cool-season grasses and a base of 40 degrees Fahrenheit after March 1 for warm-season grasses (Meehan and Sedivec 2018). For introduced grasses, the three-leaf stage generally requires accumulation of about 500 GDD; many native cool-season grasses require about 1,200 GDD.

The calendar date when these growing conditions occur varies considerably from one location to another and from year to year. For example, climate data from the weather station at Cottonwood, South Dakota indicates that the date at which 500 GDD accumulated in 2020 was May 19 and in 2019 was May 26. In comparison, 500 GDD was reached at Dakota Lakes, South Dakota in 2020 on May 17 and in 2019 on May 18. GDD data for South Dakota weather stations can be accessed using the SDSU Mesonet website. In general, examining crested wheatgrass or smooth bromegrass in your pastures might begin as early as mid-April. Mid-May might be a reasonable date to start examining native cool-season grasses, such as western wheatgrass and green needlegrass.

One final rule of thumb is to remember: “Never graze the same pasture at the same time of year, two years in a row.” Out of necessity, many operations have a calving pasture that is grazed at the same time of year, every year. However, most operations can vary where cows and calves start grazing once calving is finished. A good management goal should be to distribute defoliation pressure on desirable species to different times of the season in different years. If a pasture is grazed at the same time every year, the vigor of plant species which are most vulnerable at that season will be reduced, and they may eventually be eliminated from that pasture. 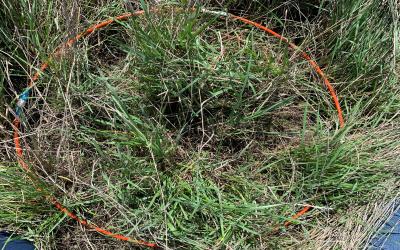 You Can’t Manage What You Don’t Measure: Range Record Keeping

Range record keeping helps detect and demonstrate landscape changes that have a direct impact on your ability to maintain or grow your herd. 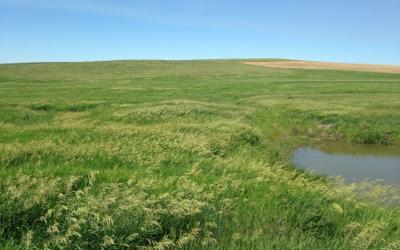 Smooth bromegrass is a cool-season introduced grass with an advanced root system that tolerates temperature extremes and drought exceptionally well. 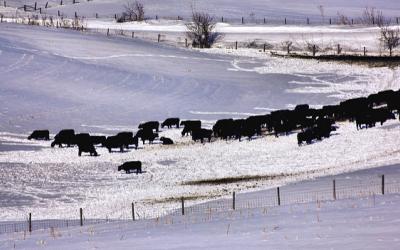 Do You Have To Defer Grazing on Winter Pastures?

How can ranchers improve profitability when feed typically represents well over half of cow-calf production costs? Grazing dormant winter range is a common practice to reduce costs in South Dakota. Grazing winter range when plants are completely dormant minimizes negative impacts on the function of the plant during the growing season. Separate pastures are typically designated for winter use only, often based on availability of winter shelter, water and access to stored feeds.