The typical dairy farm worldwide has changed over the years, and the number of cows per dairy farm has increased, making it more difficult for producers to devote adequate time to each animal. The use of sensor technology to advance the field of precision livestock farming is becoming more predominant in modernized dairy farms. However, the full extent of the impact of these big data technologies in the future of large dairy herd operations remains to be fully explored. One of the usefulness of sensor technology is the current estimation of time spent eating and ruminating during 24-hour periods for lactating dairy cows. But the estimation of individual feed intake as lb of intake per day using accelerometer sensor data has not been explored.

Feed intake is an essential parameter to correlated health status during stress periods such as the transition period in dairy cows, and it is fundamental in calculating the overall milk efficiency in dairy cows (i.e., lb of milk/lb of intake). Therefore, the purpose of this experiment was to evaluate the feasibility of using accelerometer sensor technology to estimate individual feed intake of lactating dairy cows. We hypothesized that lactating dairy cows have specific movements that are highly correlated with feed intake and can be tracked using accelerometer sensor technology.

Figure 1. Dairy cow fitted with a halter with two accelerometers over the nose and jaw area.

To test this hypothesis, we conducted an experiment in Fall 2017 at the SDSU Dairy Research and Training Facility. Twenty-four Holstein cows in late lactation were evenly distributed into 2 groups, a calibration group, and a validation group, and were monitored for 10 days during this trial. All cows were fitted with 3 sensors (Hobo Pendant G Data Logger, Onset Computer Corp., Bourne, MA) that recorded 3-dimensional acceleration in 3 axes (i.e., x, y, and z) at 10 seconds intervals. One sensor was placed on the lateral side of the left hind leg and 2 attached directly to a halter over the nose and on the jaw area on the left side (Figure 1).

Cows were fed a common lactating cow diet (17.9% CP; 0.77 Mcal/ lb of DM) using an individual gate system, and individual feed intake was recorded daily by feeding cows once daily at 0630h and subtracting the manually weighed refusals the next day before the morning feeding. Throughout the study, feed samples were taken daily for determination of dry matter (DM) and nutrient composition.

Cows were video recorded continuously throughout the 10 days of experiment. In the validation group, the video recordings were examined after the trial and provided a continuous account of all time cows spent eating. And, such eating time was classified as each minute the cow remained in her respective feed door eating, standing idle, or ruminating.

A common and necessary movement cows make in order to reach the feed bunk is to lower their muzzle to the feed bunk table level before every eating bout, and we deemed this behavior important to account for feed intake. Therefore, we assessed this behavior through the accelerometer data by measuring the change in acceleration between 2 consecutive time points in jaw and nose accelerometers. Based on this, we generated “Lag” variables (e.g., difference in x-axis nose, where LagNose-X = Nose-X-Time1 – Nose-X-Time0) derived from jaw and nose accelerations (Figure 2).

Several equations were tested to estimate the individual feed intake of dairy cows, and such equations were derived from combining the multiple accelerometer data (e.g., Leg, Nose, Lag_Nose) from the calibration group with the corresponding eating bouts (obtained throughout video recordings).

Interestingly, we observed that Lag variables that are related to change in acceleration accounted for the highest variations in feed intake. For instance, LagNose-X accounted for 44% of the variation in feed intake (Figure 3). This means that the simple and common movement cows make of lowering their muzzle to the feed bunk table level can be capture via accelerometers and is highly correlated with feed intake; thus, demonstrating the great potential of accelerometers to estimate feed intake.

Another important aspect of our findings was that among the candidate models, we observed a significant degree of accuracy. For instance, the acceleration combination Jaw-Z + Nose-Y + LagNose-Z was able to return a highly similar feed intake (i.e., DMIaccel) to the actually measured feed intake (i.e., DMIactual). As observed in Figure 4, DMIaccel closely followed changes in feed intake during the 10 days of the trial. We must emphasize the fact that such an estimate of feed intake was done based only on acceleration, and no other variable (e.g., body weight or days in milk) was used.

From a management perspective, individual feed intake could be a valuable tool for decision-making at the commercial farm level. Unfortunately, this is not currently available as lb of feed intake per day; rather, commercially available sensor systems register % time of feeding behavior. On the research side, individual feed intake has always been fundamental to determine the impact of a nutritional or physiological effect. The multiple accelerometer approach and derived acceleration models proposed here suggest that cows have specific movements highly correlated with intake.

Predicting intake in dairy cows is a challenging endeavor, and this was reflected in the amount of noise observed in this study based on accelerations alone. However, we envision that accurate accelerometer-based algorithms can estimate intake will allow dairy farmers to not only monitor abnormal eating behavior in dairy cows but also determine milk efficiency. 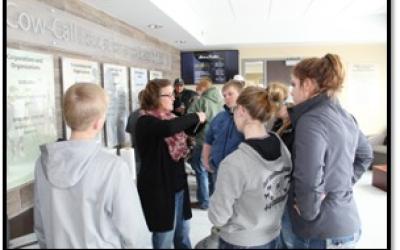 Come learn about the value of bovine artificial insemination, the A.I. process and equipment, while gaining hands on experience during this day camp. 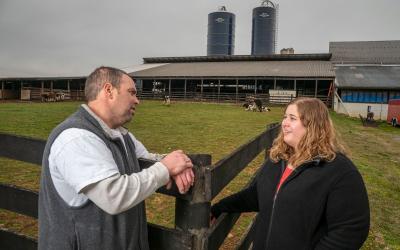 I Got a FARM Corrective Action. Now What?

The Farmers Assuring Responsible Management (FARM) Animal Care Version 4 rolled out January 2020. As dairies have their farms evaluated with this new version, there may be questions about corrective actions.