How’s Life in the Soil? Ask (Count) the Earthworms.

Agriculture in the twenty first century integrated natural resources conservation while pushing the boundaries in global crop production. Building better soil health has become more and more important in the past few decades with regenerative agriculture being promoted by scientists all around the world. Healthy soils are those that are full of optimally functioning natural organisms from the microscopic all the way up to gophers and badgers; earthworms are one of the most important factors in the health of soil.

Earthworms are ‘very special’ creatures on earth and their contribution in soil nutrient cycling and fertility management has been acknowledged from the beginning of agriculture. It is often said that in no-till farming, the tillage is done by earthworms. In search of food and water, earthworms move through the soil while they burrow a series of tunnels, improving soil porosity and ultimately soil health. Their activities above and below ground speed up the breakdown of organic materials in the soil and improve carbon and nutrient status and availability to the crops.

To conduct our study, we selected fields that were long term no-till, specifically 15 or more years, and selected sites where cover crops were planted in the fall 2019 after a small grain harvest. To incorporate experimental control in our study, we sprayed out 15ft by 30ft plots to kill the cover crops and left cover crops growing in the plots side by side, following a randomized design. We then let the cover crops grow for the rest of the year and came back the following spring and conducted our experiment. To estimate earthworm populations, we used an established protocol where a mustard-vinegar solution poured into a ring which was used to bring earthworms out from the soil profile on to the surface (Chan and Munro, 2000) (Figure 1). Thereafter, we categorized the earthworms into adults or juvenile depending on their sizes and counted them.

In our experiments, earthworm populations varied mostly due to soil conditions from just over 285,000 up to 2,000,000 worms per acre. Our study found that on average, cover crops had more than twice as many earthworms as the no cover crop plots (Figure 2). Therefore, if the goal with no till is to build a healthy soil that promotes earthworms to function to the best of their abilities, then cover crops are essential.

We are extending our study to gather more information on how different cover crop species influence earthworm population and will have a report in the next few years. 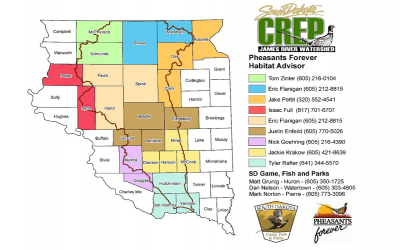 In 2020, the South Dakota Legislature approved the South Dakota Habitat Stamp as a way to generate revenue for the development of wildlife habitat on public land and waters, or to provide public access to private land. 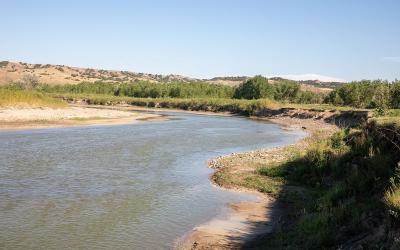 Water Rights in a Time of Drought

During a drought, it is not surprising that the South Dakota Water Rights Program will see an increase in permit applications. In South Dakota, water is considered the property of the people of the state, and depending on your intended water use, a water right permit may be needed.