The adult sunflower moths are relatively small, measuring approximately 3/8” in length with a wingspan of approximately ¾”. The moths are tan or light gray in color, and have their wings tucked tightly to their bodies when at rest (Figure 1).

The caterpillars of the sunflower moth have very distinctive coloration with bright orange heads and black bodies. They have white stripes that run the length of their bodies. The caterpillars range in size but reach approximately ¾” during their final developmental stage.

Sunflower moths do not overwinter in South Dakota and migrate north each year from southern states. They arrive in South Dakota when sunflowers begin flowering. The moths can be observed on sunflower heads during early flowering stages. During the first two instars, the caterpillars of the sunflower moth will initially feed on pollen and later transition to feeding on the seed. The caterpillars will feed directly on the seed and will also tunnel into the sunflower head tissue. This tunneling can lead to secondary infections of Rhizopus head rot, which is the main source of yield loss associated with this pest. A single caterpillar may feed on 3-12 seeds within a head. Additionally, the caterpillars of the sunflower moth spin silken threads that will bind drying florets and other materials to the head. This will give the head a trashy appearance (Figure 3).

Scouting for the sunflower moth should begin at the R4 growth stage. Moths are most active in early morning or evening. The best way to scout for sunflower moths is to use a flashlight and examine fields 1 hour after sunset, when moth activity peaks. Count the number of moths on the heads of 20 sunflowers from five random locations throughout the field. The threshold for sunflower moth is 1-2 moths per five sunflower heads.

When applying insecticides for management of insect pests on sunflower heads, be sure to orient the application so that maximum coverage reaches the head. Refer to the South Dakota Pest Management Guide: Alfalfa and Oilseeds for products labeled to control sunflower moths in sunflowers. 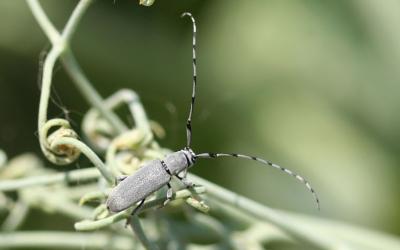 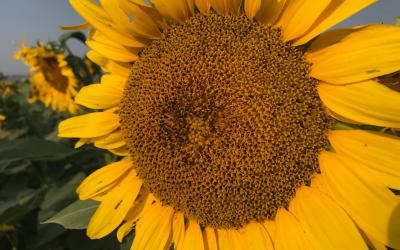 Volunteers from private industry and SDSU Extension will soon be visiting South Dakota sunflower fields to participate in the biennial sunflower survey. The survey aims to evaluate yields and production practices along with pest pressure from weeds, insects, diseases and birds. 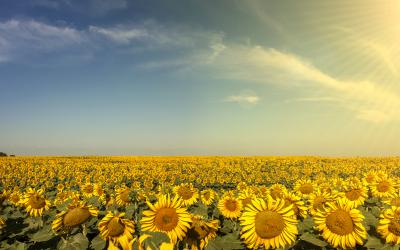 This is your unbiased, research-based guide to sunflower production, providing the latest recommendations to help increase yield, reduce input costs and protect your investment.