Dale Foiles serves as the range officer on the CMP range during the state shoot in late April. He shares the following tips and reminders for coaches with youth shooting in the CMP competition.

All rifles must be completely unloaded, with no empty clips or magazines in them, and in a case that has the muzzle end marked on the outside. At the inspection point, open the case, open the action if closed, visually check that the chamber is empty, put in the OBI/ECI, then hand the rifle to the inspector. He will weigh the rifle, (WITH a clip Rule 8.2.3) inspect it, and weigh the trigger. During inspection the rifle will be dry fired. If you don’t want the rifle dry fired on an empty chamber, you are responsible to bring a spent shell or snap cap. After the inspection is completed, insert the OBI/ECI and recase the rifle before moving to the ready area. No rifles or cases will be allowed in the range office. If you don't have a suitable case or gun sock, borrow one; the staff will try to have some suitable cases or socks to use while at the range.

Subsonic, standard velocity or high velocity only, with a speed of 1310ft/second or less. No hypersonic, magnums, "stingers"' or hollow points are allowed. Now is the time to practice with the ammo you plan to use at state. If shooting a semi-automatic rifle, subsonic and standard ammunition has marginal recoil, which helps to cycle the bolt properly during rapid fire.

The only alibis allowed will be for a range malfunction (target blowing away, etc.) A dirty rifle or one not working properly is not an alibi. Clean the rifle and then fire a few rounds (5-10) before coming to state. A few rounds won't dirty up the gun, but ensures it is working properly and everything is put back together properly before leaving home. 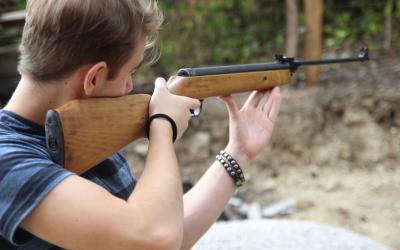 View state match records and an archive of past results for the South Dakota 4-H Shooting Sports program. 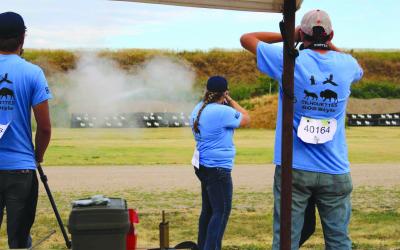