A Case of Mistaken Caterpillar Identity

During their lifecycle, European corn borer moths lay their eggs on the underside of corn leaves. When the caterpillars hatch, they initially feed on the leaf and then journey into the whorl. Initial feeding will often appear as if the epidermis of the leaf has been stripped away. As they mature and feed in the whorl, the caterpillars leave behind the characteristic shot-hole feeding injury (Figure 1). However, these caterpillars don’t stop in the whorl, but will continue down the whorl and bore into the stalk itself (Figure 2).

In addition, European corn borer caterpillars have a dark brown head capsule with a light brown or tan body (Figure 3). Small brown circle markings can often be observed on each segment of their body. These caterpillars can be observed on the leaves when they are recently hatched and occasionally in the whorl. However, they are almost always found within the corn stalk where they feed and reduce stalk integrity. The feeding often results in lodging and weakened shanks (i.e., when ears are present during feeding). 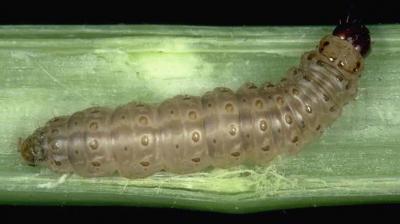 The corn earworm caterpillars are highly variable in color, and can range from yellow, green, pink, or black. They will almost always have alternating light and dark stripes on their body and small spines (sometimes they look like little hairs) across the surface of their bodies. With the exception of newly hatched corn earworm caterpillars, they will always have a yellow to brown head capsule (Figure 4).

During the first generation, corn earworm caterpillars feed in the corn whorls or on nearby leaves. This feeding often results in somewhat irregular shaped holes with jagged lines (Figure 5).

Second generation caterpillars feed on corn silks, and eventually bore into the ear through the silk channel to the ear tip where they feed on developing kernels (Figure 6). 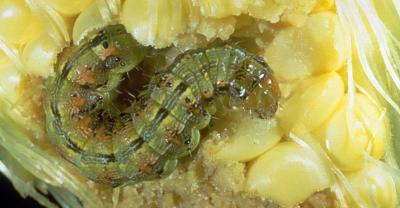 What Are the Differences Between These Species?

Table 1 compares the key identifying characteristics between these two species. 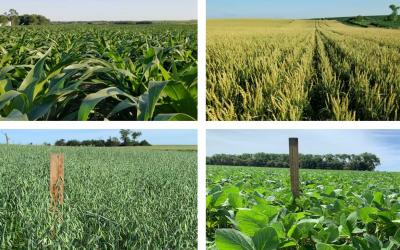