Broad-Headed Bugs in Soybean: Should You Be Worried?

This week we received a report of insects infesting a soybean field. However, they weren’t insects that we generally think of when the term "soybean insect pests" comes up. Instead, they were broad-headed bugs, which are more commonly observed in road ditches, wooded areas or in grass that contains flowering plants (Figure 1). So, what are they doing in soybean? Well, one species of broad-headed bugs is known to feed on legumes, which include soybean. It is likely that their preferred hosts are no longer available, and these broad-headed bugs have moved into soybean. Although they aren’t considered a pest species of the crop, direct feeding on the developing seed may lead to some issues. When broad-headed bugs feed they use a needle-like proboscis to penetrate the seed coat and remove tissue from the developing seed.

Broad-headed bug feeding is known to reduce the viability of seeds. Seeds that are grown after broad-headed bug feeding have low emergence, produce deformed seedlings and are short-lived. Depending on the time of year that feeding occurs, additional issues may be observed. For later season feeding, soybeans with these dark spots should be monitored after harvest to ensure that they do not deteriorate during storage (Figure 2).

Treatment for these broad-headed bugs is not recommended at this time as we are rapidly approaching harvest. If treatments are applied, be sure to check the pre-harvest interval for the selected insecticide to ensure that the soybeans are not harvested before the listed interval has passed. 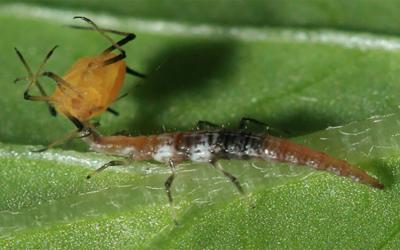 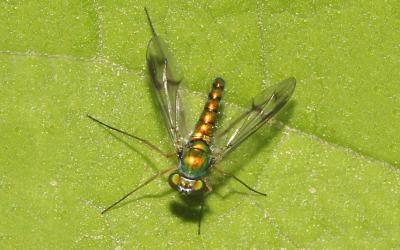