Adding Value to the Beef Carcass: Getting to know the value cuts

A typical beef animal can produce a carcass that weighs between 700 and 900 pounds. Approximately 50% of that weight consists of the chuck (fore quarter or shoulder portion) and the round (hind quarter). Traditionally the chuck and round are fabricated into either 1) roasts that require slow, moist heat cookery, 2) steaks that require some type of tenderization to improve palatability or 3) trim for ground beef. Given the challenges of palatability and convenience, cuts from the chuck and the round have traditionally been discounted relative to the ‘middle-meats’ and retail for around $4-8/pound. In contrast to the chuck and the round, the rib and loin only comprise 25% of the entire carcass. The rib and loin are traditionally cut into steaks such as ribeyes and strip steaks that are considered both very palatable and convenient. Accordingly, these cuts are also some of the most valuable in the carcass, and can bring $12-18/pound.

Connective tissue functions to support muscle tissue and is therefore by nature very ‘tough’. Generally speaking, the muscles that are used more often or that bear more weight, such as those found in the chuck and the round tend to have more connective tissue. With slow, moist heat cooking this fibrous tissue can become very tender, however this type of cooking often requires more time and attention. The rib, loin and tenderloin muscles that surround the backbone of a beef animal have considerably less demand for strength and thus, less connective tissue and are naturally more tender. With less intrinsic connective tissue, these cuts can be cooked very quickly and remain tender. These differences in initial palatability and associated differences in convenience translate to value differences among cuts of the beef carcass.

Efforts to improve the value of a beef carcass

In the late 1990’s leaders in the beef industry recognized a sharp downturn in the value of the chuck and the round. In response, they recommended an initiative to ‘profile’ the muscles from these two areas in order to find the optimal use for each muscle and enhance total carcass value. This comprehensive research project was funded by the Beef Checkoff and resulted in the characterization of 39 individual muscles from the chuck and the round. This work identified muscle that could perform well as individual steaks when separated from a roast complex.

The most well-known example of the muscle profiling research effort is the Flat Iron Steak (Infraspinatus muscle). This muscle is part of the sub-primal known as the Chuck Shoulder Clod and is located close to the scapula of the shoulder. Using traditional fabrication techniques this muscle is retailed as part of the Beef Chuck Blade Roast or could be found in a 7-bone pot roast. However, when analyzed as an individual muscle it is the fourth most tender of the carcass, and performs very well as a steak. The flat iron debuted in 1999 and by 2003 the chuck saw a 60% increase in its value. It currently retails for approximately $7.99/pound. In addition to the flat iron, alternative fabrication of the chuck and the round have resulted in several new value cuts that provide consumers with options to fill the price void between premium steaks and ground beef. The image above provides details about each of the new value cuts. These new cuts have provided value back to the beef supply chain. In 2009 CattleFax estimated a $50-70/head increase in carcass value from alternative fabrication of the Shoulder Clod and they predict that new cuts from the Chuck Roll such as the Denver Cut and Delmonico Steak will add an additional $40-50/head. 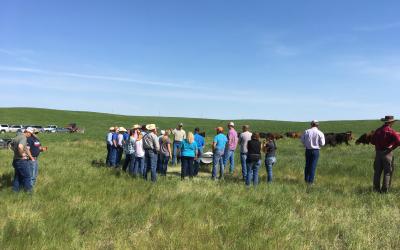 Participation in the beefSD program is an excellent opportunity for beginning producers to increase knowledge and understanding of all aspects of the beef industry, while developing the skills needed to be successful beef business managers.