Utilize a Fungicide For Crown Rust Prevention in Oats

Crown rust infects oats, and its alternate host, buckthorn (Rhamnus spp.), was found with heavy crown rust spores throughout South Dakota. If you are growing oats this year for grain, be sure to scout and plan a fungicide application to protect the oats from crown rust.

Crown rust of oats is caused by the fungus Puccinia coronata var. avenae. Unlike stripe, stem, and leaf rust which must blow up from the southern states (because they are unable to overwinter here), crown rust overwinters in South Dakota on buckthorn (Figure 1). Crown rust typically appears on buckthorn three to four weeks before infection is observed on oats. The fungus which causes crown rust in oats is specific to cultivated oats, wild oats, and a few other grasses. Crown rust does not infect wheat, barley, or rye. Wet, warm, and cloudy weather and long dew periods promote crown rust infection. Hot and dry weather halts crown rust development.

Crown rust symptoms include small oval-to-oblong shaped, bright orange-yellow pustules which are often observed on the leaves but may also be seen on the leaf sheaths, panicles and stems.

Crown rust can be managed through:

Precision agriculture tools can address the variations in a production system to enhance plant growth and crop yield. Zone management controls the variable rate of inputs for optimal performance within a defined field zone. 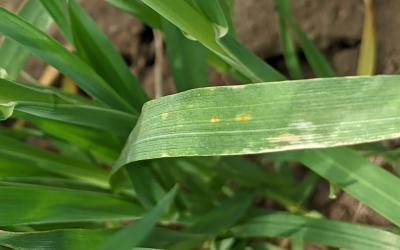