Several corn fields scouted in northeastern South Dakota counties were found with ear rots (Figure 1-A). Ear rots were mostly prevalent in areas which experienced hailstorms in the recent past (Figure 1-B).

Ear rots in corn are caused by a few fungal pathogens, and which ear rot develops depends on the weather conditions.

Fusarium ear rot develops under hot, dry weather and occurs at and after flowering. Infection can occur through the silk, but damage by birds, insects or hail increases the chances of infection (Figure 1 and Figure 2). Several Fusarium species cause ear rot, but the most common species are F. verticillioides and F. preliferatum. These Fusarium species overwinter in corn residue from corn and other plants. The fungus infects the corn ear through the silk, and it can enter the ear through hail damage wounds or wounds from feeding insects. Occasionally, Fusairum stalk rot can develop systemically and cause ear rot.

The symptoms vary greatly depending on the genotype, environment and disease severity. Individual infected kernels can be scattered in the ear, and under severe conditions, the entire ear may be consumed by the fungus. Infected kernels have whitish pink to lavender fungal growth. This disease reduces yield and grain quality. The kernel can be completely consumed by fungus, and it can be contaminated with mycotoxins (fumonisins), which can be fatal to livestock (horses and pigs).

Gibberella ear rot, also called red rot, is quite common in corn, especially under prolonged rainy weather late in the growing season. Its symptoms are characterized by a reddish mold that appears at the tip and grows down the ear (Figure 3). Gibberella ear rot is caused by Gibberella zeae. This pathogen overwinters on corn debris and has a wide host range, including small grains. The fungus infects the ear through the silk and then progresses down the ear.

Diplodia ear rot develops in corn fields with a history of this disease and weather which is wet and warm around the silking time. Diplodia ear rot is caused by Diplodia maydis (also known as Stenocarpella maydis). Infected corn residue is the main source of inoculum. Ears are most prone to infection about three weeks after flowering, when the silk dies off. Conidia are spread through splashing rain during wet weather. Infected kernels are dull-gray to brown.

Diplodia ear rot starts at the base of the cob, rotting the husk as well (Figure 4). If infection occurs several days after flowering, the ears do not show external symptoms, but white fungal mycelium may be seen between the kernels.

It is important to scout the field before harvest to determine the amount of ear rot in the field and, consequently, if there is a risk of mycotoxin contamination of the grain. Scout fields by peeling back the husks and inspecting at least 10 ears, stopping at least at five random stops throughout the field. If >10% of ears in a field have >10-20% moldy kernels, the field should be scheduled for harvest as early as possible. Care should be taken not to damage kernels during harvest. The grain should be cooled and dried to <15% moisture content immediately after harvest. Grain from fields where ear rot was a problem should be stored in a separate bin from grain from fields where the ears were healthy. 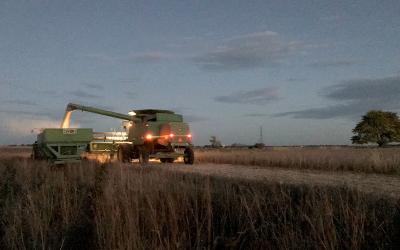 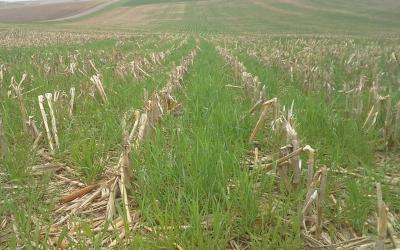 Although the 2021 growing season in has been impacted by widespread drought and record-high temperatures, recent rain events have brought planting cover crops back into the conversation. 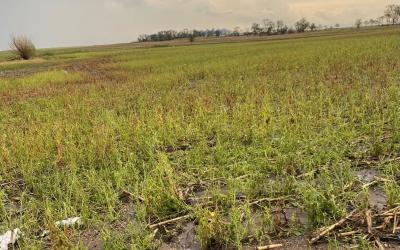 Late-season hail damage can leave growers wondering what to do next. Before deciding what to do with your hail-damaged fields, take some time to consider a variety of management options.