Producers looking for options to reduce feed costs may consider grazing corn stalks. Feed, which comprises over 50% of the annual production costs, is the largest expense of a cow/calf operation. Harvested feeds are usually blamed for the biggest portion; however, with shrinking pasture acres and rising pasture rental rates, summer grazing costs can also be significant. Grazing corn stalks is one option to reduce the total annual feed costs.

The pounds of residue per acre (DM basis) at harvest is roughly equal to the pounds of grain produced, or about 50 pounds per bushel of grain. The estimated amount of residue for various corn yields is shown in Table 1. When determining stocking rates, consider that some residue should remain on the field to assist with erosion control and organic matter management.  According to van Donk and co-workers (2012) research cattle harvested 30% of the residue.

Cattle prefer to eat the dropped ears (grain), husks and leaves first as they are more palatable and digestible than cobs and stalks. Thirty years ago 3-4% of the corn ears used to remain in the field. With new hybrid varieties and improved harvesting efficiencies, only 1-2% of corn ears remain in the field today. Getting more of the grain harvested is good for the pocketbook. However, because of increased yields from new hybrids there is still approximately the same amount of grain in the field for cattle to harvest.

Warner and co-workers (2012) reported that the digestibility of the husks and grain provides enough nutrients to maintain body weight and gestation in beef cows without supplementation. Nutritional quality declines through the grazing period as animals harvest the higher quality portions and as weathering losses occur. Nutrient composition of the diet selected at the start of the grazing period is about 6-7% crude protein and 65-70% TDN compared to lower levels (5% crude protein and 40% TDN) at the end of the grazing period. It can be difficult to estimate when protein supplementation is needed to ensure optimum utilization. Start supplementing protein when the corn in the manure begins to disappear. Spring calving cows should receive 0.5 to 1.0 pound of supplemental protein from sources such as alfalfa, distillers’ grains, oilseed meals, and commercial protein supplements.

Strip grazing provides animals with a small area to graze; however, it makes the quality of the diet more uniform over the grazing period. Animals are forced to consume both the high- and low- quality forage components of the residue.

One reason given for not using corn residue grazing is soil compaction, which could negatively affect the subsequent crop. Normal practices involve grazing cows on corn stalks residue following harvest (November) up to sometime between December and February, weather permitting. Removing animals before March ensures some frost in the ground that will help prevent soil compaction.  McGee and co-workers (2012) summarized 13 years of research in Nebraska and reported a slight numerical increase in subsequent soybean yields when following corn residue grazing compared to ungrazed fields. Researchers at Iowa State University suggest that compaction is not an issue once the soil is frozen. However, when animals were allowed to graze prior to freezing, there was a small reduction in subsequent yield in a no-till system, but no differences were seen with conventional tillage.

Grazing corn stalks residue can reduce both the amount of harvested feeds required to get cows through winter and the annual cost per cow. Proper management of livestock on fields can greatly reduce any concern about soil compaction. 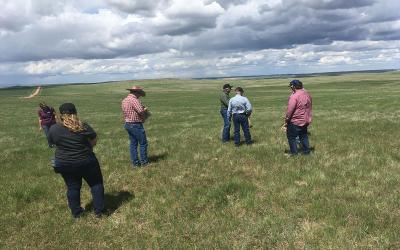