Cooler and wetter-than-average weather conditions have been prevalent in parts of South Dakota this Spring, and the extended weather forecast shows unfavorable planting conditions extending well into the month of May. According to the U.S. Department of Agriculture National Agricultural Statistics Service (USDA NASS) progress report published May 1, 2022, only 48% of spring wheat has been planted in South Dakota, which is well behind 78% in 2021 and slightly behind the 5-year average of 51%. Due to these adverse planting conditions, farmers have begun to consider switching acres away from small grains and into later-planted row crops, such as corn or soybeans. A major question that producers have been asking is, “How late can wheat be planted in South Dakota without a significant reduction in yield potential?” That can be a difficult question to answer definitively, as weather variables play an important role in determining final grain yield. As a rule, however, wheat is planted early to ‘beat the heat.’

Hard-red spring wheat is one of the most-tolerant crops to cold temperatures and frost events. Germination and growth will begin when the soil temperature reaches 34° to 36°F. It should be planted as early as possible, since cooler weather from emergence to the early reproductive stages generally favors tiller formation and the development of larger heads. Increased growth during the early season typically results in higher yields.

A study in North Dakota showed that spring wheat planted on May 1st had six fewer days of growth from emergence to the 6-leaf stage when compared to wheat planted on April 15th. The number of days was further reduced to eleven when planting was delayed until May 15th. Yield data from this research suggests that wheat loses 1.5% of its yield potential every day after the optimum planting date. However, this can vary greatly from season to season.

Planting Date Is Not the Entire Story

The wild card in this situation is the weather in June and July. Wheat is highly susceptible to heat during pollination and grain fill. Prolonged exposure to daytime temperatures above 85° to 90°F and especially nighttime temperatures above 70°F, during these growth stages, can drastically reduce yields, especially if soil moisture levels are low. At present, the National Weather Service is predicting slightly above normal temperatures in the May-July timeframe. Decisions on weather risk are ultimately up to each individual producer. 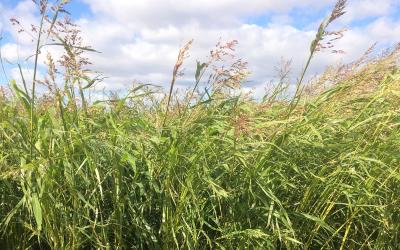