How Early Is Too Early to Plant Row Crops?

Corn and soybeans are considered warm-season crops, and just like it sounds, they prefer to grow during the warmest part of the year. With the recent cold snap much of the state experienced, row crop germination comes to mind (Figure 1). In an effort to get ahead of the game, many farmers will plant their corn earlier than recommended, and the following question may arise: “How early is too early?”

One of the biggest concerns for row crops planted into cool soils is chilling injury. Corn and soybeans both go through an imbibition period, which occurs when moisture hits the seed right after planting. They tend to be quite susceptible to cold, wet soils during this time. If that initial water is colder than 50 degrees Fahrenheit, seeds may become swollen and non-viable due to cell rupture, and roots and shoots may also be aborted. This risk is heightened when seeds are planted into dry, cool soils, and a cold rain occurs afterward. Corn that is seeded into wet soils with temperatures above 50 degrees Fahrenheit within the first 48 hours following planting should germinate just fine. Soybeans have a shorter imbibition period, and soil temps above 50 degrees Fahrenheit for 24 hours are usually long enough for acceptable germination.

If crops are planted early and germinate as expected, of course, there are still a few temperature-related risks to consider. If the air temperature drops into the 40s for several days, emergence will likely be significantly slowed, meaning crops may take two weeks or longer to emerge depending upon accumulated growing degree days. When seeds sit in cool, wet soils, soil pathogens have an opportunity to affect seedlings as well. These types of situations are when seed treatments become important. Other early-season soil and environmental conditions, such as crusting, compaction and herbicide injury, can also compound with pathogens, creating more issues.

Checking soil temperatures and developing a three-day average can be a challenging job, so that’s why the SD Mesonet weather station network collects this data for growers across South Dakota. Soil temperatures are measured at five depths, with the shallowest depth being four inches (under bare soil). The Mesonet is updated every 10 minutes and also provides daily averages. To find the Mesonet station nearest you, visit the Mesonet at SDState website. On the website, there is an interactive map where you can select ‘24-hr Soil Temp, 4” Bare’ to view the bare soil temperatures across the state.

It’s still too early in the season to predict row crop yields, but making sound planting choices and scouting for injury and signs of disease or pest infestations is always a good decision. Although it can be tempting to get a head start with row crops, be mindful of soil temperatures and the associated risks with planting early. 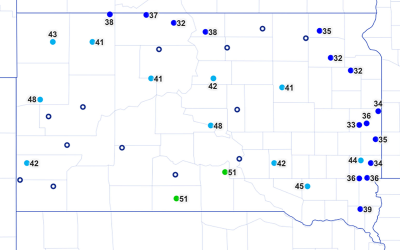 Although it can be tempting to get a head start with row crops, it's important to be mindful of soil temperatures and the risks associated with planting early. 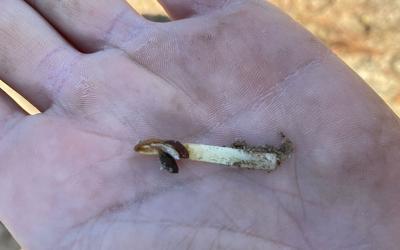