Estimating Corn Yield in the Field

As a result of late planting and inconsistent weather conditions throughout the season, both in-field and across-field variations have been quite significant this year in South Dakota as compared to previous years. Even on highly productive land, it is expected for corn yields to vary significantly across the state. Estimating corn grain yield prior to harvest can help growers make management decisions, especially storage and marketing. One popular method that everybody likes to use is the Yield Component Method, developed at the University of Illinois which can be used as early as milk stage (R3). Caution must be exercised as unforeseen stress situation can make early estimations risky.

The Yield Component Method estimates grain yield by using components that comprises grain yield such as number of ears per acre, number of kernel rows per ear, number of kernels per row, and weight per kernel. The first three components are fairly easy to calculate in the field but the fourth component, i.e. weight per kernel can be highly variable depending upon the growing conditions and hybrid genetics. Another important factor is that one cannot determine final kernel weight until the grain has matured, and more precisely at 15.5% moisture since this is how the pounds per bushel (56 lbs) of corn are measured. This factor is traditionally called ‘fudge factor’ and uses 90 with 90,000 kernels per bushel of corn. Kernel weight can vary anywhere from less than 65,000 to more than 100,000 per bushel of corn depending on the hybrid. Furthermore, the same hybrid can produce seeds of different weights in different years and locations. Consistency of crop within the same field can also affect kernel weights. Non-uniform fields require more sampling than uniform fields. 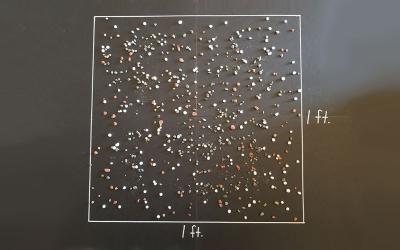