Wheat streak mosaic virus (WSMV) is one of the important diseases in winter wheat and can lead to severe yield losses. A severe infection of WSMV can lead to the loss of an entire field.

This occurs when the crop is not harvestable due to stunting and sterile wheat heads (Figure 1). However, WSMV can be effectively managed using cultural practices before planting and by understanding the inoculum source, risk factors for development, and using proactive management steps.

Wheat streak mosaic virus is transmitted by wheat curl mites, which are microscopic and can only be seen under high (at least 10x) magnification (Figure 2).

Wheat curl mites move from field to field by wind. They do not have wings and, therefore, plant to plant movement within a field is limited to wheat located near infested plants. Transmission of WSMV begins in the fall shortly after the winter wheat emerges and continues until dormancy. Fall infections often lead to the greatest yield losses for winter wheat.

The number-one risk factor for WSMD is volunteer wheat and grassy weeds in the field to be planted or in adjacent fields. WSMV can only survive in a living tissue, and wheat curl mites must feed on infected plants to acquire the virus. This indicates that the number-one risk factor for WSMV outbreaks is the presence of over-summering hosts (volunteer wheat, grassy weeds) that ensure the survival of both the virus and wheat culr mites (Figure 3). The over-summering hosts are also known as the “green bridge” between the summer wheat after harvest and the fall-sown winter wheat. Hail events, which lead to grain shattering may lead to early volunteer wheat emergence, which is likely to become infected with WSMV, and will be a source of wheat curl mites and WSMV for the newly emerging winter wheat crop.

Wheat streak mosaic virus and other viruses transmitted by wheat curl mites are best managed through cultural practices performed before planting. Unlike fungal diseases, nothing can be sprayed on virus-infected plants to prevent or cure virus infection. However, several practices can be used to prevent or lessen the chances of wheat getting infected by WSMV.

The wheat curl mites only die out if they do not have hosts, like volunteer wheat or other grassy hosts. They do not die out during the winter. Therefore, in situations where these volunteer grassy hosts overwinter, spring wheat planted into or near those areas in the spring can also be at risk of infection. Eliminating volunteer winter wheat and other grassy weed species that could host wheat curl mites at least two weeks prior to planting winter wheat is an important step in reducing risk of this viral disease. However, weeds in fields being planted back to spring wheat next spring should also be cleaned up in the fall. 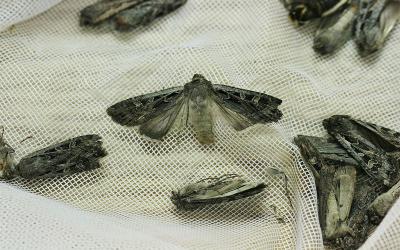 A black light trap at the SDSU West River Research Farm near Sturgis has started capturing army cutworm moths. This indicates that the moths that migrated west this spring are returning to the South Dakota plains to lay eggs. 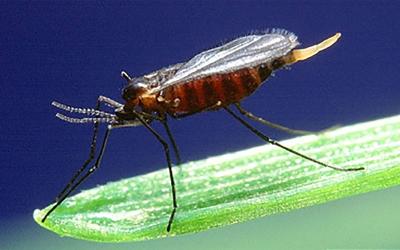 Hessian flies (Mayetiola destructor) are tiny, gnat-like flies. Their larvae are considered serious pests of wheat and occasional pests of barley and rye. 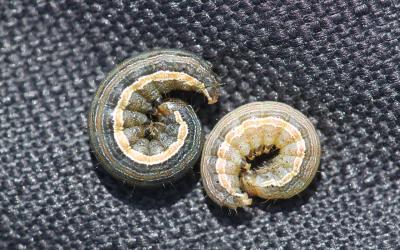 Wheat harvest is underway in South Dakota, and one of our seemingly annual pests has been observed in wheat fields. While scouting last week, we observed small populations of true armyworms in wheat in Northeastern South Dakota.