The $299,509 award is for the multi-year project to accurately map and inventory South Dakota’s remaining native grasslands, wetlands and woodlands. The project is led by SDSU Extension Range Field Specialist Pete Bauman. For this phase of the study, Bauman and his team are identifying native areas within the Dakota Grassland focus area of western South Dakota. Native habitats refer to areas that are virgin sod and have never been plowed, tilled or developed for other uses.

“Historically there has been a general idea of the extent of where grasslands are located through satellite imagery, but the methodology we are using relies on known data sets that record actual land use history. We developed a method to ‘stack’ various data to get a much clearer impression of what South Dakota land use history really looks like.”

“Our results represent two firsts. One is that this effort represents the first attempt to physically measure South Dakota’s native habitats in a way that is applicable and easily accessible to both agencies and the individual landowner. The second is that once completed, we believe we’ll have an accurate measure of native grassland conversion over the last several years, something we’ve not been able to identify in the past,” Bauman said.

Since land use data is not immediately available, the team is using data from 2012 and 2013 for their base analysis. “We have found that only about 24% of eastern South Dakota land is considered native as of 2012, so I expect that number to be less once we take a look at the 2020 data. We saw a lot of grassland get converted to cropland when corn prices were high a few years ago,” Bauman said.

According to Bauman, the stronghold of eastern South Dakota native grassland is found in the northeast corner of the state known as the Prairie Coteau, in which roughly one million acres remain intact in the landscape.

“From what we can tell today, up to 70% of western South Dakota land could potentially be native. However, with ongoing land conversion to cropland and the very significant amount of ‘go-back land’, meaning that it was tilled at some point long ago and has either passively or actively returned to grass cover, yet to be analyzed, I’m guessing that number will likely be reduced to about 60% or so. Again, we don’t have a measure of quality or overall health, this is just an assessment of size and location at this time,” Bauman said.

According to Bauman, the biggest threats to native lands are physical conversion, broadcasting non-selective herbicides, poor grazing practices, invasion of cool season exotic grasses and woody species. The biggest opportunities come from relatively large tracts in some areas, especially in western South Dakota and the Missouri and Prairie Coteaus in the eastern part of the state. Also, private landowners are key.

“We have some outstanding producers throughout the state that really care about how healthy grassland ecosystems management supports their profitability,” Bauman said.

Once they finish the base mapping, the team will revisit the data to evaluate the current state of the grass in 2020.

“We are committed to providing the information to the public for use in conservation, agriculture, energy and other land use planning needs,” Bauman said.

Other data and financial support for the project has come from a variety of groups such as the National Fish and Wildlife Foundation, Northern Great Plains Migratory Bird Joint Venture, World Wildlife Fund, South Dakota School and Public Lands, and South Dakota State University’s Natural Resources Management and Geography Departments, as well as the College of Agriculture, Food, and Environmental Sciences.

The light shading represents land that has been tilled or otherwise converted in the past. The darker green are lands classified as likely native. Black dots/shapes represent land that requires more analysis. The map does not show quality or species composition, so the team doesn’t know the relative health of the native tracts but does know there is no proof they’ve been broken. 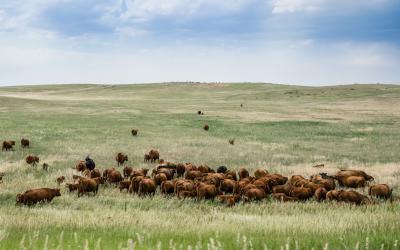 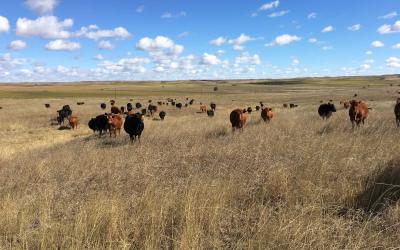 Livestock producers have a direct role in maintaining and creating biodiversity in grassland ecosystems, by choosing when, where, and how long to graze. 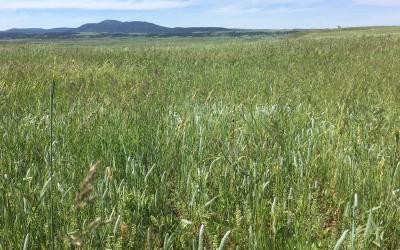 We often think of biodiversity in the context of animals, such as those that are threatened or endangered. However, biodiversity is equally important among plants, which are found throughout South Dakota, and in particular, in our rangelands.