Goldenrod Soldier Beetle: A late-summer friend in the garden

A number of ornamentals are in full bloom, ablaze with colors and, in some cases, buzzing with insects. One such insect that you may have noticed in your lawns is the goldenrod soldier beetle or Pennsylvania leatherwing (Chauliognathus pennsylvanicus). I’ve gotten questions about whether the beetle is pestiferous since they seem to be particularly fond of hanging out on flowers. The good news is that the larvae of goldenrod soldier beetle feed on soft bodied insects such as aphids and are considered to be beneficial to garden systems. The adult goldenrod soldier beetles prefer nectar and pollen yet not enough to be considered harmful.  They do play a role in pollination, similar to butterflies and native or exotic bees. It is important not to confuse goldenrod soldier beetle with other pestiferous beetles such as the blister beetle.  If you are unsure whether or not a beetle may or may not be pestiferous, take a clear image of the beetle and send it into an extension office nearby.  It is much better to double check the identity of an insect than to risk spraying a potentially beneficial one.

The beetle derives its other common name “leatherwing” from the leathery texture of its front wings. The front wings are thicker than most of common insect wings, yet they are not as hard as common beetle front wings.

As a fun aside, goldenrod soldier beetle defends itself from other carnivores such as jumping spider and jay bird by producing droplets of white viscuous fluid from openings on the sides of their abdomen. The droplets contain (Z)-dihydromatricaria acid that act as deterrent to many of the beetle’s potential natural enemies. 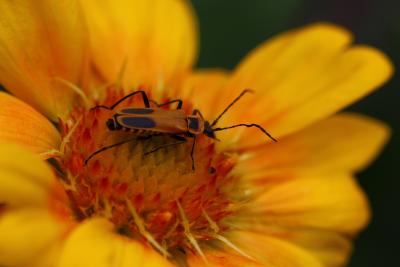