Baptisia or False Indigo is a hardy perennial that will look great from the time it emerges in the spring, all summer long and even into the winter. Most baptisias are fairly large plants that can reach to 4 ft. in height with about a 3-ft. spread. They do best in full sun and will tolerate dry conditions after they are established.

Early in the spring, babtisias begin to grow with the first signs of their new shoots pushing up out of the soil. These new shoots are fun to watch because they grow quickly and often don’t have any leaves until they get several inches tall – they almost look like small asparagus stems when they first start to grow. The young stems are smooth and may range in color from dark green to a lighter blue-green color.

False Indigos usually bloom in June with their characteristic pea-like flowers that are typically blue but may range in color from white, yellow, lavender, purple and shades of brown. The flowers are in a spike- like stem at the end of most of the young shoots. The flowers last for a few weeks and are very attractive. They can even be used as a cut flower.

After the flowers fade, they are replaced by small seed pods that look like a small, rounded pea pod. These pods continue to develop until they may be up to 2-in. in length and about ½-in. in diameter. They are usually a lighter green color throughout most of the summer but turn dark brown to almost black in the fall. That is when one of the most interesting aspects of the plant becomes apparent. In most varieties, if the stem with the pods is shaken, one can hear the seeds bouncing around inside, giving them a nice rattling feature that is great for kids and even adds a little interest on a windy day. You can cut the stems and use them in a dried arrangement or just leave them on the plant to add some interest to the garden during the winter months.

There has been a lot of interest in Baptisia in recent years with several new varieties that are available. Another advantage of these new plants is that they tend to be a little more compact and stay nicely upright all season long. Sometimes if one plants the plain species, Baptisia australis, it’s a good idea to grow them with some support so that the plants don’t flop open by mid-summer. This was especially common if they were grown in a rich soil, were over-fertilized or in too shady of a site. The newer named varieties seldom have this problem.

Baptisias are generally free of pest problems and long-lived plants that are great additions to just about any garden that has the space for one of these great plants. 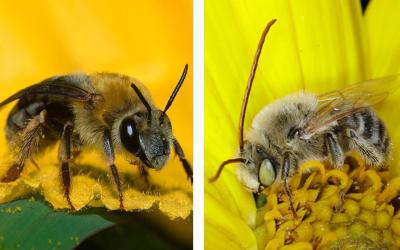 South Dakota is home to more than 400 species of native bees. In this article, we will highlight the squash bee and the long-horned bee, two beneficial native pollinators.