Aquaculture has expanded beyond Asia, Central America and the farm ponds of southern states up north to South Dakota. Of course, fish production in South Dakota opens a new market for the state’s soybean farmers.

“We are looking at aquaculture as a new client for soybean meal,” says Doug Hansen, Director on the South Dakota Soybean Research and Promotion Council, who farms near Elk Point. “Livestock producers have been our biggest buyers, but that market is pretty much capped out and aquaculture is our new opportunity.”

Hansen explained that the Council is supporting research on northern finfish species that can be produced domestically in inland operations and, while pond production is acceptable in the southern U.S., indoor recirculating aquaculture systems (RAS) would be more appropriate for South Dakota. “We believe there is money to be made in aquaculture in South Dakota, and we are investing checkoff dollars to make sure that the increased commercial production will be inland and domestic instead of offshore and foreign.”

Fish consumption is rapidly increasing globally as consumers demand more meat protein, and commercial aquaculture presents a good opportunity. Fish need substantial amounts of protein in their diet. Much of that protein has been provided by fishmeal, but that has be-come expensive, and the increasing demand has created short supplies. Soybeans provide a practical alternative. Like livestock, fish producers have to understand dietary needs, as each species has different nutritional requirements and only can accept so much soybean meal in their diet. Thus, research is the first step to developing the local industry.

Michael Brown, a fisheries scientist at South Dakota State University in Brookings, is studying how to include soybean meal and other soy-based ingredients in the diets of fish that can be produced locally, including yellow perch, rainbow trout and tilapia. “Our long-term plan is to produce finfish here in South Dakota and increase the use of sustainable plant feedstuffs in place of fishmeal. 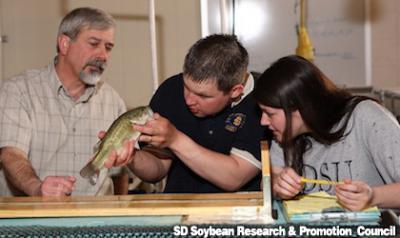