The South Dakota 4-H Volunteer Hall of Fame was established in 2002 as part of the 100th birthday celebration of 4-H. Its purpose is to recognize and celebrate adult volunteers in South Dakota who have dedicated themselves to making significant contributions to the development of the SDSU Extension 4-H Youth Development Program in the areas of:

Nominations are accepted all year. The new class will be selected after August 1 each year. SDSU Extension 4-H Youth Development celebrates 4-H Volunteer Hall of Fame recipients at the 4-H barbecue on Sunday evening, during the South Dakota State Fair in Huron.

If you have questions about the South Dakota 4-H Volunteer Hall of Fame Award, please send an email to the State 4-H Office.

View pictures from the recognition ceremony

Mary Williams joined South Dakota 4-H at nine-years-old in Brule County as part of both the Clover Lassies and Wanalain 4-H Clubs. She completed project areas, including sewing, meal planning, baking, cooking, canning, judging, beef, horse, rodeo, sheep, gardening and soil conservation. She gave demonstrations and illustrated talks at local meetings, county fairs, and at the state fair. During her years enrolled in 4-H, she also held many leadership offices in both the Clover Lassies and Wanalain 4-H Clubs. She attended 4-H camp each summer at the 4-H camp near Madison, S.D. She attended the State 4-H Council meetings in the Brookings during the summer throughout her high school years. During her time in college, she participated in the University 4-H club at SDSU, where she served in various officer positions. Williams’ freshman year of college, she attended the National Club Congress in Chicago. In August of 1969, Williams married Myron Williams and the couple lived near the Farmingdale community in Pennington County, where they volunteered as club leaders before they had children of their own. In the 1980’s they moved to Wall and helped lead the Cedar Butte Challenger’s 4-H Club until 2001 when Williams took over as club leader. Williams focuses on conducting club meetings according to proper parliamentary procedure and providing the best training for the officers in Pennington County. “My greatest joy is watching young 4Hers grow in speaking, leadership and project skills, then become accomplished and successful as teenagers and high school graduates,” said Williams.

Diana Jons has been an active 4-H volunteer for 15 years. Jons started her involvement with Gregory County 4-H as a leader for a local club, the Pleasant Valley Busy Bees. She started as a leader in 1999 and was a leader until 2011. Jons was also the president of the Leader's Association from 2001 until 2013 and continued to be involved until 2015. Throughout this time, she encouraged youth to create their goals, stating "You get out of it as much as you put into it. Focus on your strengths and do the best you can." She oversaw Bullseye Shooting Sports for many years, providing safety training in all areas of guns and assisted with archery. For about 15 years she assisted the South Dakota team members and coached different disciplines at the National 4-H Shooting Sports competitions. Jons continued to attend national competitions and support local youth, even after she was no longer a leader. She was a strong advocate of "Youth in Action" events, and continued to educate and promote in the areas of illustrated and demonstrated talks, special foods, and fashion review and style show. Jons would often lease animals to members so that they could participate at both county and state levels. Through her years being involved in 4-H, Jons played a significant role in the 4-H experience for many members in Gregory County.

Evelyn Werkmeister of Armour S.D. has been a 4-H Leader for 23 years. She volunteers at countless activities throughout the year and goes above and beyond to help 4-H members. Werkmeister has also been an asset to Douglas county, as she has assisted in many 4-H activities without complaint or recognition. When asked, Werkmeister said that all of her 4-H memories have been good.

Joy Braun is currently in her 28th year of being a leader in Spink County 4-H. She started out by helping her own two sons and daughter with their 4-H endeavors. Braun then became a club leader helping nieces and nephews as well as all of the club's members. She was a club leader for the Prairie Lassies and Clippers 4-H club in Brentford, S.D. for 20 years. Braun still works with members on their sewing and other projects. She has taught many children how to sew pajama pants, pillowcases and quilting. She is very involved in special foods at the county level and has helped at the state fair for many years also. She enjoys helping with fashion review and public speaking events. Braun has volunteered with Performing Arts Camp and other 4-H camps through the years. Braun continues to lead the committee at the concession stand at Spink County Achievement Days. Attendees note that she does such a wonderful job of organizing the event, as well as providing meals that are always full of healthy options.

James Wenzlaff volunteered numerous hours over a 20-year period to 4-H by serving as the rabbit and poultry superintendent for the Sioux Empire Fair. Over the course of his years helping with the rabbit and poultry projects, he made many improvements to the barn. Wenzlaff volunteered hundreds of hours during the fair to give each 4-H youth the best experience possible. Whether it was being there early to feed the chickens and rabbits or designing new ways to keep the sun off the animals, his work was seen by thousands of people. Many a 4-H youth would receive help from Wenzlaff, whether it was during one of the rabbit or poultry shows, or just by Wenzlaff being ever vigilant of the animals under his roof. His daughter, Tanya, remembers her dad spending countless hours at the fair, even before the fair had begun. She said, “Dad loved kids, and he loved what 4-H stood for.” Jim passed away in December of 2016. His loss was felt by all members of the 4-H community. Wenzlaff’s daughter, Tanya, received the honor on his behalf. 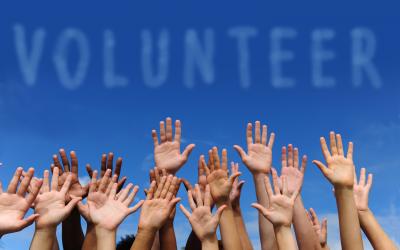 These policies and forms provide useful information for volunteers.

SDSU Extension volunteers participate in a variety of service programs through our organization, helping us expand the scope and effectiveness of our mission. In exchange for their service, volunteers receive training on a wide array of topics of interest to them.