Managing nutrition during breeding season is critical for improving lambing rates, but it can often be a challenge. When breeding for spring-born lambs, forages are declining in nutritional value while nutrient requirements for sheep are increasing. Fall lambing requires breeding when heat can challenge conception. Regardless of the time of year, it’s important to keep ewes and rams in mind before, during and after breeding season. Prior to and throughout breeding, many producers utilize flushing to increase ovulation rates. During the breeding season, rams are working hard to service ewes in heat while attempting to meet their own nutritional needs. Increasing the flock’s plane of nutrition continues to play an important role in ewes by reducing early embryonic death and helping rams recover after breeding.

Success of breeding is largely dependent on nutrition. Simple management techniques, such as flushing or managing ewe lambs that are still growing separately can boost breeding success. Simply put, flushing means increasing your flock’s plane of nutrition at least two to three weeks before and after breeding. Flushing helps to initiate estrus, improve ovulation and increase conception rates by promoting the ewe’s body to signal to the reproductive tract that she is ready to support herself plus a growing fetus or fetuses. Additionally, flushing improves embryonic attachment to the uterine wall, hence reducing the number of early embryonic deaths, which most commonly occur within the first 30 days of conception. Ensuring that ewes are bred within that first 21 days (the first heat cycle) can help shorten your lambing window. High-energy feeds, such as corn, are commonly used for flushing at approximately one pound per head daily. Moving ewes to a higher-quality pasture or cover crop can also elicit a similar response to flushing. Ovulation and weaning rates are positively influenced when ewes can consume greater amounts of quality forage.

Maintaining an increased plane of nutrition is even more important for first-time mothers. In many cases, young ewes aren’t finished growing while also being asked to also carry offspring. However, it has been shown that young ewes that raise offspring their first year may have greater lambing performance as mature ewes. If infrastructure and feed resources allow, increasing supplementation to ewe lambs and having a separately managed breeding group specifically for ewe lambs will promote conception and maintained pregnancy.

Ram care is also important before, during and after breeding and should be monitored. The energy requirement of a ram increases by approximately 9% from maintenance to pre-breeding. This improves semen quality and allows for excess body stores during an energy-demanding breeding season. On average, a ram can lose up to 25% of his own body weight throughout a breeding season.

It’s generally recommended to utilize one ram per 30 ewes, but if breeding groups are placed in large pastures, or greater than one ram per 30 ewes, a ram’s requirement to travel farther or service more ewes will increase energy expenditures. Additionally, adverse weather conditions and low forage quality further challenge a ram’s energy demand. Extra supplementation may also be needed for ram lambs utilized during the breeding season. Improving the longevity of rams is a common concern on range operations, so take care of the rams that play a huge role in conception rates and, ultimately, your bottom dollar.

Body Condition Score Prior to Breeding

Body condition also plays an integral role in improving conception. Body condition scores (BCS) should be assessed at least three weeks prior to breeding to make nutritional decisions, especially because increasing body condition takes longer than decreasing condition. While there may be incidences of sheep maintaining or improving body condition on low-quality pasture, this is extremely difficult when considering the nutritional demands of the breeding season. Both ewes and rams should be in a BCS 3 to 3.5 prior to breeding. Ewes in BCS 3 or slightly lower typically show an improved response to flushing effects. Rapid weight losses after joining ewes and rams should be avoided to achieve maximum conception and pregnancy rates. Therefore, flushing diets should be provided to ewes and rams for two to three weeks before and after breeding. For more information on BCS, check out the article, Managing Sheep Body Condition Score Throughout the Year.

Optimizing flock nutrition throughout the breeding season can help improve conception rates, lambing percentages and ram longevity. Utilizing high-energy feedstuffs, such as corn supplemented at about one pound per head daily, or the use of nutrient-dense pastures and cover crops make excellent options for both ewes and rams. For the best results, a flushing diet should be made available at least two to three weeks prior to breeding, throughout the season and two to three weeks after breeding. Proper nutritional management is one simple way to positively influence your lamb crop and, in turn, increase the profitability of your flock. 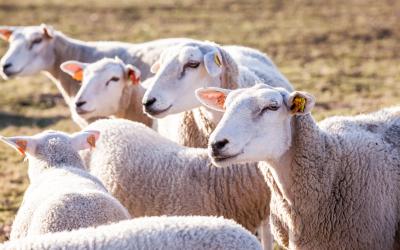 This fact sheet and barn reference are for sheep producers to implement body condition scoring in their management practices.

The Effects of Ewe Nutrition on Lamb Performance

In the livestock industry, profitability is determined by the efficiency of production; with growth and development of offspring having a large impact. In sheep production, ewe nutrition is one of the biggest factors in fetal growth, milk production, and lamb performance; therefore, determining how profitable a production system will be. Not only does the ewe depend on proper nutrition for fetal development but also udder development and milk production.