Gerbera Daisies have been a popular flower for decades and have become more common in recent years.

Gerbera, like other plants with a daisy-like flower, are members of the sunflower family (Asteraceae). There are approximately 30 species in the wild, extending to South America, Africa and tropical Asia. They were first classified in 1737 and named after the German botanist, Traugott Gerber, who travelled extensively in Russia and was a friend of Carolus Linnaeus.

Gerbera flowers have the typical daisy shape but come in a wide range of vibrant colors ranging from white to pink, red, yellow, orange, burgundy and there are also bicolor types available. Different varieties provide single to double flowers and some that are known as spider flowers with thinner and more pointed petals. Gerbera are a great cut flower and the fifth most popular after roses, carnations, chrysanthemums and tulips. Some varieties work well as potted plants or as an annual flower that will grow in most sunny areas and bloom practically non-stop all summer.

The meanings of Gerbera flowers come from those attributed to the general daisy family. These meanings include innocence and purity. Daisies are also a classic symbol of beauty. In addition, Gerberas hold an added meaning of cheerfulness, which stems from the assortment of colors available.

Gerberas are easy to grow as potted plants or as part of a mixed planting in a larger container. They can also be planted directly in the ground but avoid planting in heavy clay soils. They need lots of light to be able to produce lots of flowers but don’t want to be in too much heat. During the hottest part of the summer, morning sun is best with some shade in the afternoon. Avoid growing them in dark-colored containers next to brick wall or on other surfaces that will collect and radiate lots of heat, like on a blacktop or concrete driveway.

Powdery Mildew is probably the most common disease that affects gerberas. It appears as whitish spots that quickly spread until the entire leaf surface is covered. The white powdery growth is a fungus that over time becomes gray to tan/brown felt like patches. Leaves may become stunted, curled, chlorotic and eventually wither and dry up.

Aphids, whiteflies and thrips are the most common insect pests that may feed on gerbera plants. They eat the sap from gerbera daisy leaves, which causes the leaves to turn yellow. Whiteflies also eat plant juices and saps, and lay eggs on the underside of the leaves. Thrips cause damage by eating leaves and also act as vectors bringing diseases from other plants they have previously eaten. A thrips infestation can also cause the flowers of the Gerbera daisy to have a distorted shape or you may notice that the petals have whitish streaks on them.

Spider mites damage gerbera daisies by sucking the sap from their leaves to the point where the leaf yellows or even drops off. Spider mites are most severe when the weather is hot and the plants are stressed from a lack of water. 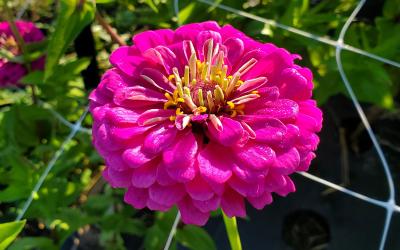 SDSU Extension and the South Dakota Specialty Crop Producers Association will host Over the Moon Farm & Flowers for a webinar to discuss cut flower farming in the Midwest. 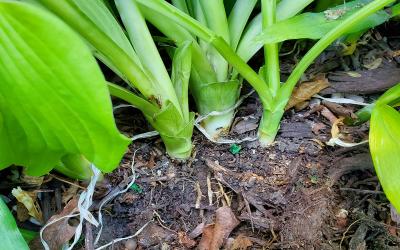 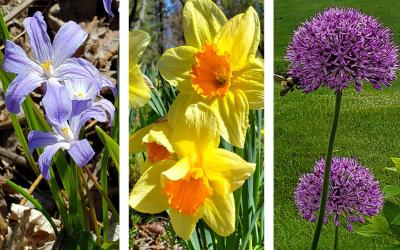