What Can I Do About Cucumber Beetles in My Garden?

Each year in South Dakota, cucumber beetles are a threat to cucumbers and other cucurbit plants (e.g., squash, melon, etc.). Cucumber beetles are a common pest in gardens and pumpkin patches during late summer and early fall. They can cause severe injury to cucurbits if large populations are present and are left unmanaged.

Adult cucumber beetles overwinter in debris and become active in the spring. They search for cucurbits to feed on, mate, and lay eggs. Cucumber beetles often go unnoticed until the next generation of adult beetles emerge during the summer and populations dramatically increase. The larvae developing in the soil have little to no impact on plant health. However, the adults feed on the stems and foliage of cucurbits. As the plants mature, the beetles will progress to feeding on the flowers, and eventually the fruit. Cucumber beetle feeding can result in girdled stems, widespread defoliation, and spoiling of cucurbit fruit (Figure 2). Along with feeding, cucumber beetles are the vectors of bacterial wilt, which is a disease that can quickly infect many types of cucurbits. The bacteria that causes bacterial wilt plugs up the vascular tissue of cucurbits, causing the vine to wilt and die. There is no recovery for plants once they are infected.

Several cultural practices can be applied to prevent infestations from becoming severe. At planting time, place mulch around cucurbits to deter cucumber beetle adults from laying eggs near the plants. Removing mulch and debris after harvest can then reduce the number of overwintering sites for cucumber beetles. If you detect signs of bacterial wilt, be sure to remove the infected plants quickly so that cucumber beetles are unable to feed on them and spread the disease. You can easily identify bacterial wilt, by observing which plants do not bounce back during the cooler evening temperatures. Destroy infected plants and do not put them in your compost pile, as they can remain a source of inoculum for the following season.

Early detection is critical, so be sure to regularly scout cucurbits throughout the growing season. If you regularly experience cucumber beetle infestations, consider using row covers when plants are transplanted to keep the beetles and other cucurbit pests off until the first female flowers bloom. The threshold for managing cucumber beetles is when you detect two or more beetles per plant or when estimated defoliation of leaves reaches 25%. Once cucumber beetles reach threshold levels, consider applying an insecticide to avoid extensive injury to the infested crop. Because cucurbits are continually flowering, it is important to read and follow label directions and avoid applying the insecticides to the blooms. Pollinators are essential to fruit production and will be harmed by insecticide exposure. Be sure to properly clean produce after harvest to reduce any potential insecticide residuals. 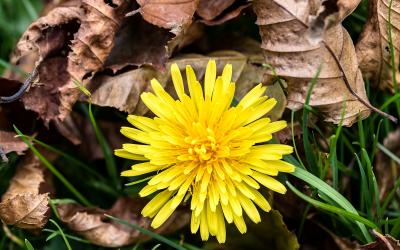 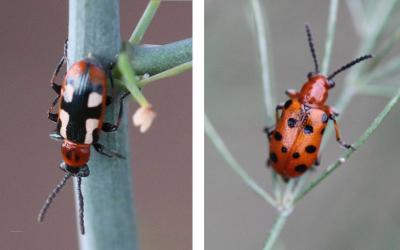 Beetles on Your Asparagus: Why You Should Be Concerned

When thinking of asparagus pests, we normally worry about early season feeding on developing spears. However, late summer and fall scouting is important to get ahead of spring insect problems. Two insects we recommend scouting for are the common asparagus beetle and the twelve-spotted asparagus beetle.