Potato leafhoppers are a migratory pest that commonly impact alfalfa fields throughout South Dakota. They cannot tolerate our cold winter temperatures, so they travel up from the southern United States each spring. Their annual migration prevents them from becoming an issue until the later alfalfa cuttings.

Feeding injury caused by potato leafhoppers resembles drought stress and, if left untreated, can reduce both yield and forage quality.

Adult potato leafhoppers are approximately 1/8 of an inch long and pale green in color. They have translucent wings that cover their bodies like a tent when at rest (Figure 1).

The nymphs (immatures) vary in size and resemble adults except they have wing pads present instead of fully developed wings (Figure 2).

Both the nymphs and adults have specialized hind legs that allow them to jump long distances. They also have piercing-sucking mouthparts that they use to feed on plant sap.

Potato leafhoppers should not be confused with aster leafhoppers, which can be identified by dark markings on their heads.

It is important to routinely scout alfalfa fields for potato leafhoppers to ensure that serious injury does not occur. Large populations of potato leafhoppers will cause stunted plants and may lead to significant losses to the tonnage and quality of the alfalfa crop.

One of the first signs of a potato leafhopper infestation is the appearance of “hopper burn” in the field. “Hopper burn” occurs when potato leafhoppers use their mouthparts to probe the plants, which disrupts the cells within the leaves and turns them yellow (Figure 3).

Aside from checking fields for feeding injury, potato leafhopper populations should be scouted for using a sweep net. It is best to sample the field edges because this is where potato leafhoppers tend to be more of an issue. While walking in a “W” or “Z” pattern, swing the net in a 180-degree pendulum swing 25 times. Each of the pendulums (left to right) counts as a single sweep. Count the total number of nymph and adult potato leafhoppers present in the net. Next, measure the height of the alfalfa plants. Economic thresholds for alfalfa are based on plant height; 0 to 12 inches tall (Table 1), 12 to 18 inches (Table 2), 18 to 24 inches (Table 3), and 24 to 30 inches (Table 4).

If management of potato leafhoppers is necessary, there are a few recommendations to consider: 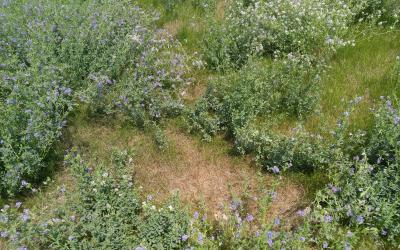 An identification guide for Alfalfa Insect Pests in South Dakota 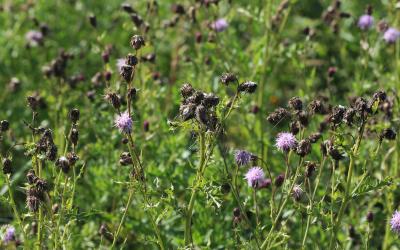 Fall weed control can give the best weed control, but it also can be a poor time. If the noxious weeds were sprayed or clipped earlier this summer, and there is good weed growth now, this would be an excellent time to spray these weeds and get a good kill.