“Climate change has created potentially disruptive situations which means we have to learn to manage many plants and animal populations,” Charles Fenster, professor in the Department of Biology and Microbiology at SDSU, said. “One example is that certain species found on the tops of mountains in the American southwest hundreds of years ago are now found in places such as the Black Hills. Species have evolved to adapt to changing conditions. The alternative is that they become extinct.”

Work on the book started in 2011. The book provides valuable insight into how management of fragmented plant and animal populations can improve through practical applications of conservation biology. Whether to maintain genetic isolation is a major issue for managers of wild animal and plant populations.

Fenster and Michele R. Dudash joined others to co-author the book. Dudash is a professor and Head of the Department of Natural Resource Management in the College of Agriculture and Biological Sciences. She is a population biologist. Her research focuses on both the ecological and genetic factors responsible for a population's persistence or demise in nature.

Fenster developed an early interest in population dynamics and genetics. He has focused on the conservation of biodiversity, which this book represents. His current work focuses on the origin of genetic diversity through the study of mutations.

Dudash and Fenster are experts in the field of inbreeding and documenting the consequences of crosses to alleviate inbreeding. They have worked at various locations across the United States, earning respect for their research and developing relationships with other scientists conducting similar work. They accepted positions at SDSU in Brookings in 2015 and have continued to collaborate with experts in their field.

Frankham encouraged them to develop a paper on the subject of genetic management and that idea grew into the fundamental premise for this book. That original work has been cited over 300 times since 2011, providing the foundation for the book which called on the talents of this group of authors.

The value of the book comes from its use as a tool to teach conservation biology, conservation genetics, and wildlife management, Dudash said. The authors predict that between 3,000 and 5,000 copies of the textbook will provide the basis for upper level graduate students to understand the fundamentals of managing populations for the future.

By making people aware of the impact of changes, habitat can be restored. This is what is happening with the Dakota skipper butterfly.

“We need to get the word out and try to actively manage populations or we let the situation continue and watch the species disappear,” Dudash said. “There are many populations that have adapted to their environments. Thus there is some fear about introducing genetic variation from populations that are hundreds of miles away.”

Fenster said prairie chickens thrive in the Midwest. However, in Illinois, the grassland environment where the prairie chickens occur have been replaced by fields of corn and soybeans. Consequently, the few remaining populations are isolated from one another as they exist in similarly isolated patches of prairie. There has been very little hatching success in that area, leading to fewer and fewer birds, likely associated with loss of vigor following mating between relatives. Introducing genotypes from another state restored genetic diversity and hatching success improved. The authors indicate that same dilemma is increasing and is faced by tens of thousands of species. “We are not advocating for a change in farming practices,” Dudash said. “We want to create an awareness of what is happening and why it happens. “

Dudash and Fenster point out in the book that inbreeding difficulties with wildlife can be understood by looking at the selective breeding that takes place in cattle herds. If animals are too closely related, deformities such as dwarfism can result. Another example would be the concern about dogs developing hip problems and genetic abnormalities that occur at puppy mills.

Fenster said outbreeding depression can occur as a consequence of animals that are brought together from different areas in an effort to maintain the integrity of species. The offspring of that union may perform less well than the individual parents. However, the book demonstrates that even if mixing is at first deleterious, populations can recover and eventually thrive. It’s an important paradigm shift in thought.

Collaborating on the book has been very rewarding, Dudash said. “We have worked as a team to write and edit every chapter to make sure it is intellectually engaging and reader-friendly. It has been a wonderful experience to meet and learn from others in this field.”

“We are proud to be associated with SDSU and South Dakota,” Dudash said. “People know we are a resource. To get started on proposing sound genetic management decisions, we first had to pin down a definition of what is a species for conservation. There are more than two dozen definitions of what is a species. We needed to identify a practical definition. Thus we wrote a paper on this topic, which has been adopted by the International Union for Conservation of Nature and cited over 100 times since 2012. That work has been incredibly impactful at the global scale, impacting management around the world, which is pretty exciting.”

“We are in the process of working on a second book, which will be more a primer focused at individuals who are actively engaged in the management of species and their habitat,” Fenster said. “The work can apply to many systems in South Dakota. An example would be the Badlands and need to manage the habitat for the black-footed ferret. The book will provide the fundamental principles with recommendations for managers. It will provide specific ideas, much like a cookbook." 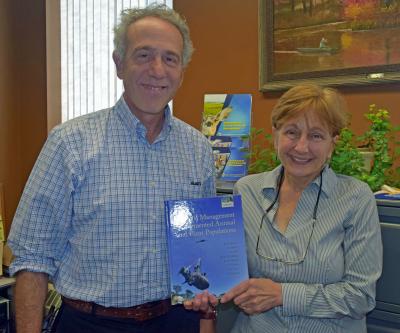