BROOKINGS, S.D. - Weeding after dark isn't easy. Neither is fighting cravings to stay sober. And, working in the garden was the one thing that got her through the cravings. So, that's just what Jackie Solano did - if cravings hit at midnight, she would grab a flashlight and walk to the community garden and weed until they passed.

"The garden saved me. When I go there, I am at peace with myself," explains Solano, who was addicted to meth, but has been clean for 18 months now. "I like to be in the garden because it makes me happy to build something and watch it grow."

Even today, now that Solano is free from cravings and is focused on rebuilding a sober life with her husband and their son, the garden continues to bring her joy.

"Gardening keeps me busy and the food we grow there helps feed families who don't have enough to eat," Solano says.

The garden Solano credits with helping her remain drug-free, is one of nine community gardens SDSU Extension developed together with members of the Oglala Lakota tribe through the SDSU Extension Native American Beginning Farmer Rancher Program and Supplemental Nutrition Assistance Program-Education (SNAP-Ed).

Designed to address food insecurity, the program looks different today than it did when it was first introduced to the Pine Ridge community. Originally, the thought was that vegetable production could provide much needed income to community members.

However, it soon became clear that selling fresh produce to some, while other family and community members could not afford to buy food was not a model the Lakota people were comfortable with, explained Jason Schoch, SDSU Extension Tribal Local Foods Associate.

"As we listened to community members, two things became apparent; people are uncomfortable selling food, when so many are hungry and don't have the resources to buy food, and there is nearly no access to land for large-scale farming, whether that is vegetable farming or what we typically think of as commercial agriculture," Schoch said.

Schoch explained that due to the fractionated nature of land, a family may have for example 300 acres, however, those 300 acres could potentially be co-owned by dozens, if not hundreds of individuals. Access to capital is also a big challenge. The average income for a resident of Pine Ridge is $7,500 a year.

"We are really trying to empower the majority of tribal members to become involved in agriculture - not traditional crops and cattle - because the majority don't have the land or capital to make that work. We're working with community members, helping them develop community gardens, small acreage and micro-sized farms, as well as gardens in their own yards - because this is a model that has proven to work," Schoch said.

With this focus, a program that began with only 18 interested tribal members in its first year, has expanded to include more than 736 participants.

"SDSU Extension didn't come here and say, here's what you need to know. We began by asking, 'what do you want to know?'" Schoch said. "Our grassroots approach seems to be a good fit for Lakota culture which is very much bottom up. Leadership styles historically were more along the lines of servant-leadership versus top-down leadership."

It became apparent to Schoch and his colleague, Patricia Hammond, SDSU Extension Tribal Local Foods Program Assistant, that the act of gardening was being embraced for its therapeutic benefits almost as much as it is for the vegetables, herbs and berries produced.

"We aren't traditionally gardeners, but getting out in the sun and reconnecting with nature makes us all feel better because we're able to provide food for ourselves and others," explained Hammond, who grew up on the Pine Ridge Reservation, and spent several years prior to working for SDSU Extension serving the Pine Ridge community through educational gardening programs geared toward teaching science to youth.

Focusing on the mental health benefits of gardening, SDSU Extension recently asked a veteran to share his story of how gardening served as therapy to work through Post Traumatic Stress Disorder (PTSD).

"The first day, there were seven attendees. The next day, 49 showed up because those seven went home and told their family and friends that this could help them," Schoch said.

"Many in our community are dealing with PTSD from trauma - historic and ongoing," Hammond added. "Gardening helps get through trauma. They find calmness being in nature."

King, like Solano, began working in the community garden as a volunteer. Because his mother drank and used drugs when she was pregnant with him, King was born with several challenges and battles major depressive disorder. Couple these conditions with the recent death of an uncle, who was King's father figure, and King says at the time he began volunteering in the garden, he was considering suicide.

"Gardening helps me relax, it's therapeutic for me. It's helped me overcome feelings of ending my life," King said.

King became connected to the SDSU Extension community gardens through Hammond's daughter, Alex. She got to know King in school and suggested that Hammond ask him to volunteer in the garden. As Hammond got to know King, she was impressed with his work ethic and enthusiasm for gardening. He began to open up to Hammond and rely on her for advice beyond gardening. She became his mentor. Today, King affectionately refers to Hammond as "momma bear."

In addition to helping him overcome suicidal thoughts and gain confidence, gardening brings King joy because through gardening, he helps provide food to his community.

"Last summer, Jackie and I took a box of vegetables over to the elder center. They loved it and asked us to bring more. It makes me feel wonderful how happy this food makes them."

Although community and backyard gardens are much smaller than traditional crop farming, gardeners face similar challenges. Too little rain or one hail storm and all they've worked for can be lost. Through the Native American Beginning Farmer Program, SDSU Extension offers workshops in building low-cost, high tunnels, raised beds and drip irrigation.

A high tunnel is a hoop-shaped structure, covered in strong plastic, which allows for earlier planting and protects crops from weather hazards like frost and hail.

By teaming up with partner agencies, like Natural Resources Conservation Service (NRCS), SDSU Extension connects community members with programs that help cover the cost of materials for high tunnels. Over the next three years, NRCS Environmental Quality Incentives Program (EQIP) and the Oglala Sioux Tribal Land Office, will provide 30 high tunnels to Pine Ridge communities, schools and tribal members. SDSU Extension will provide the production education, together with other partners who will help teach tribal members how to build the structures.

"It's a team effort amongst partners," Schoch said. "Our approach to gardening is very practical and as low cost as possible."

For example, they encourage the pathways in gardens to be at least lawnmower width apart and teach how to build raised beds as well as constructing small scale hoop houses by attaching PVC pipe to the wooden frames, providing some extension to the growing season.

Working with community partners, the SDSU Extension team is also helping community members build Walipinis (earth-sheltered cold-frames), designed using tires, which draw heat from the earth and, when topped with a high tunnel roof, can allow for year-round growing of some vegetables.

"I've been inside these structures when it was 20 below zero outside and 55 degrees inside," Schoch said.

"Building something for future generations is an important tenant of Lakota culture," Schoch said. "Tribal people are still very tied to the land. Historically, Lakota people were not farmers, they were hunter gatherers, however, the younger generation understands that they no longer have the land base to support buffalo, so they need something new."

"Gardens and small-acreage farming brings hope in a place where there is so much disparity," Hammond added. 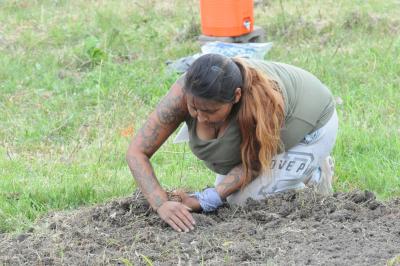 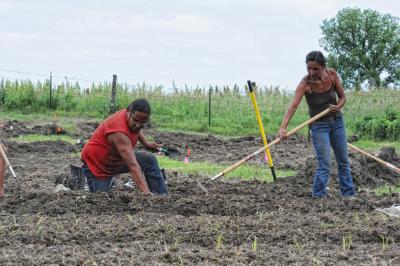