BROOKINGS, S.D. - Following the 2017 growing season, where many complaints over dicamba reached state Department of Agriculture offices across the nation, researchers from land grant universities set out to conduct a study assessing off-target movement of post-applied dicamba products - Engenia and Xtendimax.

"The goal of the research was to duplicate labeled applications and determine if secondary movement contributes significantly to off-target movement of both formulations," explained Gared Shaffer, SDSU Extension Weeds Field Specialist.

He added that although Fexapan is also labeled for post-application, it was not part of this study.

The findings of this preliminary and on-going study showed a considerable portion of the total injury is attributable to secondary movement and the likelihood for some secondary movement of either product appeared high. There were no differences between formulations at any distance.

Although the on-going research was conducted by university researchers in Arkansas, Indiana, Nebraska and Tennessee, the data matters to many South Dakota soybean growers.

In each study, small plots, between 2-3.5 acres in size, were set up to be sprayed with either Engenia or XtendiMax.

Wind speed during application at each site was at or between the label requirements of 3 to 10 miles-per-hour at application. Sprayer speed was 8 miles-per-hour, spray volume was 10 gallons-per-acre. TTI 11003 type nozzles were used.

A summary of the preliminary data is in Figure 1. Below.

As shown in Figure 1, percent injury is on the Y-axis; distance of injury from plots on X-axis.

Secondary movement is not affected by application but chemistry of herbicide.

The preliminary research shows that application of Engenia and Xtendimax had the largest off-target damage to susceptible plants 20 feet away from plots, followed by 100 feet with the second most injury and 200 feet with the least in both primary plus secondary and secondary alone. 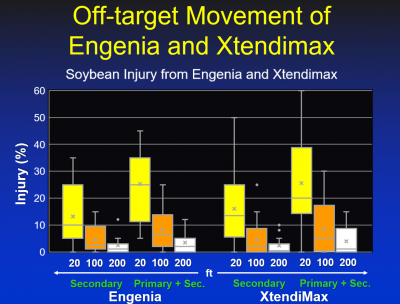