BROOKINGS, S.D. - When Kelly (Wilkerson) Bail sold Waves of the West, her rodeo sponsor flags business, in 2016, it was with a grateful heart.

"The business supplemented our family's income and allowed me to work from home while my kids were growing up," explains Bail, 57. "I sold it because I was ready to have more time for my grandkids."

When she sold, Waves of the West, the business was more than three decades old. And, the sponsor flags Bail and a small team of seamstresses handmade, were flown in rodeo arenas across the nation and at the National Finals Rodeo.

Looking back on how her business got its start, Bail attributes her sewing skills and confidence to her years in 4-H.

She got her start sewing as a 5-year-old, making clothes for her Barbie dolls. When she was old enough to join 4-H, her mom signed her up for Mrs. Mary Ellen Murphy's 4-H sewing club, Buttons and Bows.

Murphy was an accomplished seamstress who Bail looked up to. "She was always dressed to the nines for a ranch woman - wearing wool suits with a hat and purse to match," Bail recalls.

Under the watchful eye of Murphy, as an elementary student, Bail was soon making her own clothes.

When her clothing was judged, the judges would often challenge her to try a new or more difficult skill for her next project. "I learned more from the white and red ribbons than I did from the blues and purples," she says.

Later on in her 4-H career, when Mrs. Murphy was ready to retire as 4-H leader, Bail's mom, Arlene Wilkerson took over. "She spent many late night's before Dress Reviews supporting me," says Bail.

In addition to sewing skills, Bail says outside of school, 4-H was one of the few social opportunities she had. Her dad worked for Custer State Park, so the family lived in the park, nearly 20 miles from town.

"4-H got me out among people. I still have friends today that I met through 4-H," she says.

Positive feedback from judges and accumulation of blue and purple ribbons gave her confidence in her abilities. So, when the opportunity came for her to turn her hobby into a business, she was ready.

At the time, Bail was in her early 20s and working for a restaurant in Hermosa that had been asked to be a sponsor of Hart Ranch RV & Camping Resort evening rodeos.

"My boss said he needed a sponsor flag, so I said, "why don't you let me try to make one for you.' Others saw my flag and started hiring me. Pretty soon, I was hired by the Hart Ranch to make all their sponsor flags. Then Sutton Rodeo got my name and my business snowballed from there,'" Bail says.

Although she sold her business, Bail continues to sew. Only, today, when Bail sits down to her machine, it's to make blankets for her 12 grandchildren or for those in need.

Bail is among a group of seamstresses from the tri-state area who make reusable feminine products for women in Ethiopia. 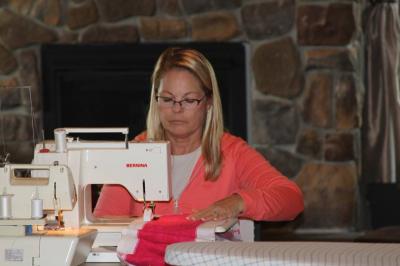 Courtesy of Bridget Teigen. 4-H alumnus, Kelly Bail, credits the skills she gained through her years as a 4-H member with developing the skills she needed to run Waves of the West. A custom rodeo flag business.