The history of Distillers grains in the US is quite interesting. During early colonial times, George Washington (1732-1799) distilled liquor for personal use, and fed the “slop” left from fermentation to his small group of cows. It was not until almost a century after (1907) that the first study was published about feeding to cattle “distillery grains or spent grains” (as they were called at the time). Early in the 20th century and during the alcohol prohibition era (1920-1933), the widespread demand for liquor to supply the “speakeasies”, left significant amounts of mash that was “surreptitiously” delivered to cattle. Throughout the years, livestock continued to be the natural end user, however not excessive credence was placed in their nutritional value. Their variability together with the limited knowledge of animal nutrition at the time, oftentimes led to digestive upsets and what was called “sour milk”. With their increase in popularity they started to appear in feeds and feeding textbooks, and nutrient tables of composition. However, they were still far from the quality products we know today as distillers’ grains. The main constraint was that they were just a wet residue that needed to be disposed of. Variability of the overall process led to wide ranges in content of protein, fiber, and fat, which discouraged an early, more massive adoption. Their high-water content, made them difficult to handle and preserve, and together with the limited knowledge on how to adequate incorporate them into livestock diets they were oftentimes more of a headache than an asset. The first constraint then was how to transport them economically, which prompted the first drying attempts. This solved one issue but added a protein quality problem for the early “distillery grains”. The Maillard reaction between amino acids and sugars which renders both indigestible was first described in 1912. In the 16th Edition (1956) of Morrison’s Feeds and Feeding the author discussed the use of “spent grains and thin stillage” in cattle diets. He also addressed the importance of the Maillard reaction in animal feedstuffs. But it was not until the breakthrough of the detergent system of analysis (Goering and Van Soest) in the 1960’s and early 70’s that we were finally able to better quantify the nutritional significance of this reaction in cattle feeding. Nutrient variability and drying time/temperature became early culprits in “distillery grains” quality. This resulted in variable available protein content, oftentimes resulting in poor livestock performance, and a nutritionist nightmare. Significant investments in R&D by leading bio refineries late in the 20th and early 21st centuries redeemed the nutritional value of this feedstuff. A little over a decade ago however a new source of variation took a dent in the confidence of nutritionists.

As nutritionists we know our ABCs, or perhaps our 1,2,3! We learned the caloric value of fat compared to protein and carbohydrates. In fact, that was our main argument in defense of DDGS. The almost three-fold concentration in nutrients once starch is fermented ended in a product with more energy than the grain that originated it; pure mathematics using the old TDN system. There is no need to feel old or outdated since NE is oftentimes still calculated from TDN. In mathematics 4*2.25 is still greater than 4; 9 vs 4 to be more exact. If that were not true, why extracting the fat and sell it at a premium when compared to DDGS?

How is it possible then that multiple recent research results suggest that animals fed reduced-fat DDGS have performed as well if not better than those fed full-fat DDGS? The fact is that as nutritionists we are excellent mathematicians, but sometimes poor biologists. The energy content of individual feeds estimated adding the caloric value of individual nutrients outside of the animal is somewhat misleading. It does not account for the associate effects between feeds and nutrients in the digestive tract or even further once they enter the metabolism. These “numbers” are just a guideline and should be taken as such. I am not saying that it is fruitless to count calories at the restaurant, however, it is just part of the equation, metabolism also plays a large part as well. The same is true of the energy content of compounded diets with feeds of different nutrient concentration and caloric values measured in a spreadsheet or even a computer. In mathematics 2 + 2 = 4; in animal nutrition however 2 + 2 can equal 3 or better yet 5.

During ethanol production most of the starch in corn is fermented which leads to a nearly three-fold concentration of the rest of its nutrients. As a result, DDGS contain 27-30 percent crude protein, an energy density similar or even higher than corn grain, and are a good source of phosphorus. Research has shown dairy and beef cattle perform adequately in diets where DDGS constitute almost 1/5 to 1/3 of all feedstuffs in the total ration. Regardless if it is milk or weight gain cattle fed to maximize performance, require balanced, high energy diets. In the US this high energy density is obtained by increasing the concentration of cereal grains, particularly corn. Cattle challenged with higher starch concentrations however can be prone to suffer metabolic problems, acidosis being the most common. To avoid these problems nutritionists either regularly include buffers (i.e. sodium bicarbonate) in the ration or offer them free choice. In fact, to perform at their genetic potential dairy and beef cattle are oftentimes in the verge of subclinical acidosis. This low pH shifts the rumen microbial population with proliferation of non-structural carbohydrate-digesting bacteria in detriment of those that degrade structural carbohydrates. This results in a slow-down of fiber digestion which can usually be verified by the presence of undigested forage particles in the manure. As a result, even in the absence of clinical acidosis, the energy benefit of the inclusion of high energy feedstuffs can be offset by the fact that less energy is obtained from fiber fermentation.

Subacute ruminal acidosis is not only a function of low pH but also for how long does this condition remain. Figure 1 shows the rumen pH of a cow which in spite of bouts of subclinical acidosis only developed the clinical form when pH was below 5.5 for almost 24 hours. The time elapsed between days 3 and 5 is likely required for microbial changes to occur. Krause and Oetzel (2006) found that during the first 140 days of lactation, 12 to 40% of the cows had ruminal pH below 5.5. This threshold is more often used in beef cattle as subacute acidosis causes a reduction in feed intake and animal health issues, without negatively impacting fiber digestion (Beauchemin and Mcallister. 2016). Furthermore, the authors suggested the threshold of pH 5.8 for dairy cows below which there was a negative effect on milk production. Sub-clinical acidosis is a common problem in feedlots and dairies across the US. As expressed above it happens because of the need to challenge animals with energy dense diets.

Putting a price tag on the effects of feedstuffs which could be labeled as “functional” is difficult. One example is the “effective fiber effect” (EFE) since there are at least two ways to assess it. One is the capacity to increase chewing, rumination, and as a result, elicit changes in the patterns of volatile fatty acid production in the rumen (more acetate and less propionate). The other are the changes in fermentation patterns (again more acetate and less propionate) because of the intrinsic higher digestibility of the fiber. Examples of such differences are the EFE of soy hulls compared to that of cottonseeds. With soy hulls the effects are mostly due to changes in ruminal fermentation patterns of volatile fatty acids (more acetate rather than propionate). With whole cottonseeds however, the effects are compounded between increased chewing and rumen buffering effect by saliva, plus changes in volatile fatty acid ratios in the rumen because of the high digestibility of cellulose in cottonseeds. Although different in nature, the end-results are the same, which are the changes in ruminal fermentation patterns.

With DDGS however the situation is different; they are high in digestible NDF, however, this fiber is ineffective (as measured by the increased chewing activity) due to its small particle size. The difference though, is that in spite of supplying energy in the form of fermentable fiber, protein, and fat, they supply little to no fermentable starch. In spite of the absence of starch their net energy value is high because of the higher concentration in oil, fermentable fiber, and protein. In the past DDGS contained almost 10% more energy than corn grain precisely because of this high oil concentration. Modern corn grain varieties contain between 3-4% oil and when starch is fermented to ethanol, oil is concentrated to 9-12%. Ethanol plants however that remove nearly half of the oil through centrifugation obtain as a result reduced-oil DDGS with 5-6% oil. Since oil has more than twice (2.25) the energy than carbohydrates or protein the removal of 50% of the fat results in reduced fat DDGS with very similar energy value compared to corn grain. Distillers’ grains have other beneficial effects that are derived precisely from what they do not add to the diet.

The Importance of What DDGS do Not Supply

Nutritionists tend to assign values to feeds mostly depending on the nutrients they supply. In fact, least cost ration balancing programs compare feeds based on their nutrient concentration and their price per ton.

Most of the plant-derived feeds fed to cattle are relatively high in rumen degradable protein (RDP) with values close to 65-70%, which is fermented to ammonia in the rumen. If the rate of ammonia production exceeds the microbes’ ability to utilize it to form amino acids, there is an accumulation of rumen ammonia. Ammonia absorbed from the rumen into the systemic circulation is normally detoxified by the liver via the urea cycle a process that requires additional energy expenditure. This detoxification system however can also be overloaded resulting in elevated blood ammonia levels. One of the advantages of DDGS is that they usually contain between 50 to 35% RDP posing a less “taxing” effect on the ammonia detoxification process. As a result, they leave room for other feeds with higher RDP (i.e. alfalfa hay, soybean meal, etc.) which are important sources of energy of fermentation, carbon chains, and lysine for both the rumen microbes and the ruminant.

In addition, little attention is usually paid to the fact that because DDGS have no fermentable starch left, they do not lower pH as much and as a result do not interfere with forage fiber fermentation. The strategic use of DDGS replacing part of the corn in the diet decreases the starch load. In spite of this, energy supplied by corn protein, fat, and structural carbohydrates not only offsets this removal but it does so while making the rumen less acidic and improving forage fermentation. 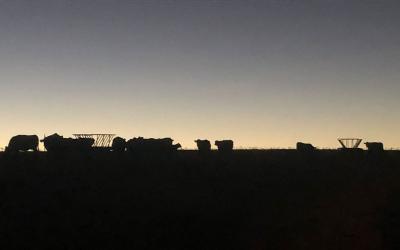 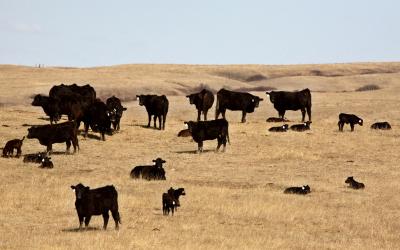 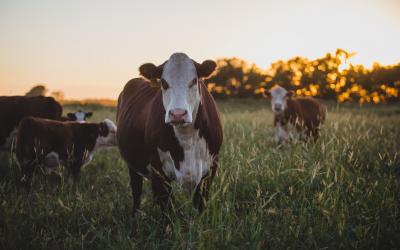 Looking to get more hands on artificial insemination practice? Join us on January 15, 16, & 17 in Baltic, SD!