How does spring flooding impact weed seed movement and dispersal? This question may be at the bottom of most producer’s problematic list as spring rolls around. The importance of it lies in the inevitable spring that will come with the possible elevated diverse weed seed emergence in some fields due to flooding. Producers that farm areas next to rivers see this more than others. For example, those who farm next to the James River may see Canada thistle seed movement down the river as it floods and then recedes.

The flooding that is occurring from spring snow melt may cause weed seeds that are on the soil surface or eroded soil to move, and possibly long distances. The current flooding situation this spring may increase the number of problematic weeds in those flooded areas. Weed seeds such as kochia, waterhemp, thistle, ragweed and many other commonly found weeds are easily moved by water.

The first step to take after the water recedes and plant growth starts, is to scout your fields. After the field has been accessed, a weed control plan needs to be found and initiated. Field scouting for weeds is always a good practice that will pay dividends later. Scouting fields for weeds helps to determine what weed control measures need to take place before the cash crop is planted or drilled, and what may need to be done later in the growing season. The areas where flooding is worst may need to be extensively scouted for new weeds that where introduced into your property, and possibly higher density of some common weeds.

It is hard to think, but there may be benefits to weed control in a flooding situation. If winter annual weeds such as marestail exist on your property, they may be killed by the flood waters. This is caused by the excess water forcing the oxygen out of the soil, which causes the plant roots to die or drown due to the lack of oxygen. 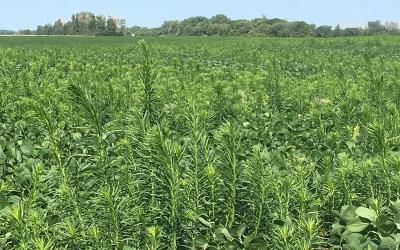 Marestail (also known as horseweed) is considered either a winter annual or biennial species that is often difficult to identify at the rosette stage. In the Dakota’s, marestail will germinate in the fall and bolt in the spring. 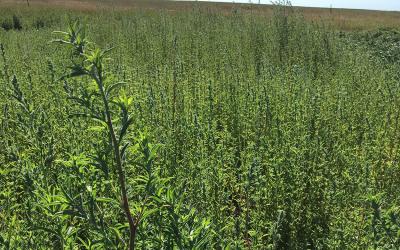