Every year at this time, one of our most planted perennial flowers takes center stage with its wonderful display of flowers – the daylily. Daylilies (Hemerocallis) are one of America’s favorite flowers with good reason. They are easy to grow and adaptable to just about any garden location. They tolerate poor soils, heat and even short periods of drought, once well established, but will perform best in good soils with even moisture available and full sun exposure.

Daylilies get their name from the fact that each individual flower is open for just one day. But usually each flower stem, known as a scape, will hold five to nine flowers or more and multiple scapes may develop on each plant. Daylily plants are actually made up of clusters of plants or fans of foliage, each connected to its own root system but also joined to the other plants in its cluster. Each individual plant will usually produce a flower scape once it is large enough. Flower stems can grow quite tall, usually 2 to 3’ tall, holding the flowers well above the foliage. Flowers are usually fairly large, 4 to 6” wide with six petals. Flower color can range from white, yellow, pink, lavender, purple, orange, red and burgundy with many cultivars having combinations of several colors along with interesting wavy margins to the petals, colored edges or contrasting colors in the flower’s throat. The leaves look grass-like and range from about 15 to 30” in length. They are about 1” wide and “V” shaped.

There are actually several different species of daylily available but hybrids have pretty much taken over the market and garden center. New cultivars are being released every year. No matter your taste, there is probably a daylily out there that you would enjoy having in your garden. Daylilies are actually a plant that many home gardeners have had fun doing their own hybridizing. The male and female flower parts are fairly large and easy to see, making cross breeding quite easy. Many plants will also readily produce seed pods and viable seed.

Most daylilies will bloom in early summer then not bloom at all the rest of the year except for the occasional secondary scape that grows up. However, since the advent of the famous Stella de Oro, one of the first reblooming daylilies, there are now dozens of different cultivars that will provide a longer season of bloom. Generally this means that they will still have their largest display of flowers in late spring or early summer but then sporadically produce additional flower scapes the rest of the summer, even until frost. Removing flower scapes after the flowers have faded (deadheading) will significantly increase the likelihood of getting more flowers. If you do not deadhead, the plant will be putting energy into producing fruit and seeds, instead of more flowers. I suggest cutting the flower stem down low in the plant so that an ugly stub is not left above the foliage.

Plant daylilies in a full sun to partly shady location in well-drained soil. Spring is the best time to transplant or divide daylilies but they are tough enough to withstand division just about any time during the growing season. Just be sure to provide extra water during dry periods to help plants get reestablished. If you want to divide a large plant you can either “cut out” a section, leaving most of the plant intact, or dig up the entire plant, separate it out into small clumps or fans, then replant in their new location. You can cut back the foliage to about half its length to reduce water stress during hot weather if you wish.

Daylilies have few pest or disease problems. The most common insect pests are aphids and thrips. Forceful jets of water will usually dislodge the aphids or you can use insecticidal soap. Thrips cause most of their damage in the flowers, where you will see whitish streaks in the colored parts of the flower petals. But you may also see damage to the leaves, usually near the mid-vein or bottom of the “V”. Their rasping-sucking mouthparts will cause silvery streaks in the leaves. Control of thrips is much more difficult since most insecticides have little effect on them. But they will usually not cause serious or permanent damage to the plants.

Leaf streak is the most common disease of daylilies and it has been a fairly common problem with the wet weather we have had this spring and early summer. It starts out as small, dark green spots along the mid-rib of the leaf. Soon these spots turn brown and enlarge, followed by the leaves turning yellow. The disease is caused by a fungus that overwinters on diseased foliage from the previous year. It spreads with rainfall or sprinkler irrigation. The best means of control is to avoid sprinkler irrigation and remove diseased leaves when they appear. Heavily infested leaves will produce sclerotia, a dark, seed-like overwintering structure, that allows the disease to survive through the winter. So a thorough cleanup of the plants in the fall, after the foliage has been killed by freezing weather, can be of significant help in reducing the reoccurrence of the disease. Root and crown rots may also be a problem but generally only if daylilies are planted in poorly drained soils. 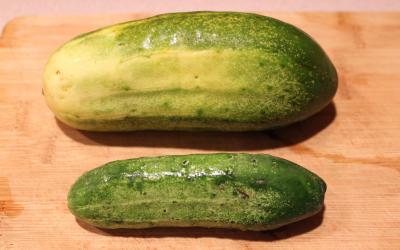 ucumbers fresh from the garden are a summer treat! Harvesting them frequently not only helps keep the plant producing new fruit, but it also helps ensure that you are picking them at their optimal flavor and tenderness. 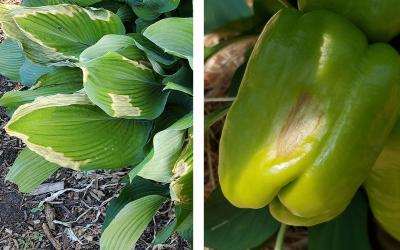 Leaf Scorch and Sunscald in the Garden

Long stretches of hot, dry weather will upset the growing habits of all plants and will lead to some unusual symptoms on leaves and produce in the garden. July and August are a prime time to watch for leaf scorch and sunscald. 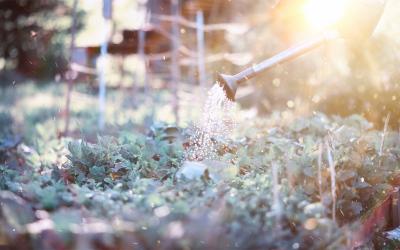 When summer temperatures soar with no sign of a break, it is hard on humans and plants. Learn some tips that will help protect plants from heat stress, including soil protection, watering considerations and providing shade.