The recently released 2017 Census of Agriculture data (NASS, 2017) shows that South Dakota (S.D.) has experienced a considerable increase in acreage harvested of two major crops, corn and soybeans over the past decade.

Dominance of Corn and Soybean in S.D. and Neighboring States

In 2017, corn and soybeans together accounted for 70% of S.D. harvested crop acreage, in comparison to 57% as of 2002 (NASS, 2017). In contrast, both wheat and hay production declined over the 2002 - 2017 period, with wheat harvest acreage reduced from 12% to 8% and hay harvested acreage reduced from 27% to 18% (Figure 1). Other crops, including sunflowers, oats, sorghum and barley, when combined together only accounted for approximately 5% of all harvested cropland over the last 15 years. 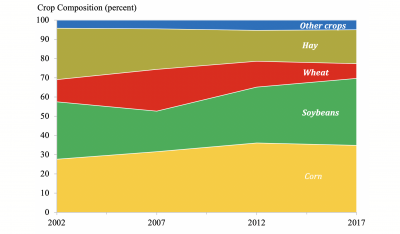 Proportion of corn and soybeans production in several neighboring states has also experienced a similar growth (Table 1). Meanwhile, the growth in acreage in corn and soybeans in the Midwest states is accompanied by a loss of crop diversity, which could cause over-reliance on insecticide, herbicide and fertilizers.

Compared to monoculture or simple rotation system, more diversified crop rotation systems could bring productivity and environmental benefits through reducing chemical and fertilizer usage and keeping pollutants out of the waterways (Davis et al., 2012). A survey carried out in South Dakota in spring 2018 with 3,000 farm managers indicated that producers to a large degree agreed with the soil and ecological benefits of diversified crop rotation (Table 2). The top three ranked benefits by the 708 respondents were ‘breaking pest and disease cycle’, ‘promoting ecological diversity’ and ‘increasing soil fertility and productivity’. Among the factors listed, ‘protecting against the commodity price volatility’ was considered as the least beneficial, with 41% respondents showing disagreement with this statement and 8% showing strong disagreement.

The adoption of diverse crop systems in the farming system can protect farmers against the reduced demand for a single crop (Francis, 2005). Due to oversupply and uncertain export demand in the near future, diversification of crops could help farmers diversify their income source while improving soil and ecological health.

Despite the well-recognized soil and ecological benefits of diversified crop rotation, the increasingly dominant trend of two major crops indicate producers also face major challenges that prevents them from transitioning to more diversified crop rotations. While lack of access to specialized planting equipment, lack of available crop insurance, and a need to develop new marketing information for new crop varieties were considered by some producers as challenging, a major challenge faced by most producers is the lacking of profitable 3rd and 4th crops.

The Bottom Line and our Current Research

The forecast for the next week will continue to be favorable for the development of alfalfa weevils. See our latest recommendations for staying ahead of them.